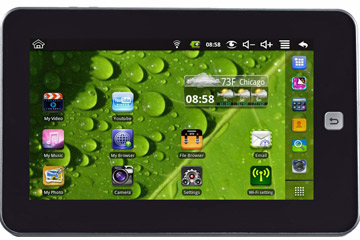 Screenshot from Maylong's M-250 tablet. Things are starting to look up a little in this tab, compared to the M-150.
Image courtesy Amazon.com

Maylong has a few tablets on the market, but (and we'll get to this in depth later) it can be a bit tricky to tell if you're going by the company's Web site. The first iteration of the tablet was the M-150. It was followed by the M-250, M-260, M-270, M-285 and finally the M-970, all of which cost right around $100, with the exception of the M-970, which was priced around $200. It can be difficult to discern exactly which tablet models are still on the market, but going by the offerings of big stores like Sears and Walmart, everything except the M-150 is still available online or in stores.

One extremely important difference between the 250 and 260 versus the other models: They have a resistive touch screen as opposed to capacitive. That means that while the newer models have touch screens that use your finger as an electrical current (which can accommodate a light touch), the 250 and 260 are pressure sensitive. You know at the grocery store when you struggle to hit the buttons just right when entering your PIN on the debit reader? Yup, that's what you'll be dealing with. (The 250 even comes with a stylus, which doesn't bode well for the usability of the touch screen.)