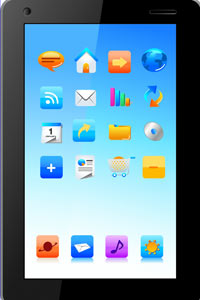 All tablets need apps. The Pandigital relies on GetJar, a Web-based Android shopping center for its apps.
iStockphoto/Thinkstock

Anyone who has a smartphone or tablet knows that there is an app for just about everything. Driving directions, social media, dog whistling; software applications can transform a run-of-the-mill mobile device into a versatile -- and for some, life-altering -- tool.

Which is what makes Pandigital's lack of access to many apps a rather large turnoff from some tablet shoppers. The models run on two versions of the Android operating system: SuperNova and Nova feature Android 2.3 (Gingerbread), while the Nova and Star operate with Android 2.2. The devices are not Google-approved, and thus do not come loaded with Android Market (Google Play), the virtual shopping center that offers more than 150,000 tablet apps [source: CNet].

Each of the Pandigital models include some smart physical features, including a micro-HDMI card slot that allows a user to connect it to a TV - a nice alternative to the devices' low-resolution screen - and a microSD card reader that makes game and video play smooth. The tablet also has a headphone jack and mini USB connection, along with rear (3.2 megapixels) and front (VGA) cameras (except for Star, which only has a front-facing camera). Lasting about six hours per charge, the SuperNova's battery power is on par with other tablets in the price range [source: Pandigital].

At this end of the price scale, tablet shoppers aren't likely to find all of the bells and whistles of an iPad, but the Pandigital line of tablets will handle the basics. They're also a bit easier to lug around than that slab of rock that Moses brought down from the mountain. To get a better idea of how Pandigital tablets compare to other mobile devices, check out the links on the next page.