How Sony Tablets Will Work 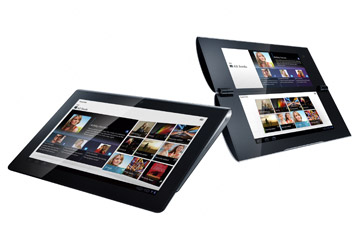 Sony's upcoming S1 (left) and S2 tablets, slated for release in September 2011.
Image courtesy of Sony. Design and specifications are subject to change without notice.

In the 14 months after the iPad's April 2010 launch, Apple sold 25 million of its new tablets [source: Hughes]. Although the iPad was the first to enter the race, a number of competitors are giving it a run for its money -- and before 2011 comes to a close, Japan-based Sony will be one of them. The company plans to release two tablet models, both of which are known only by their internal code names: S1 and S2.

The slate-style S1 will feature a 9.4-inch (23.9-centimeter) screen that aims to hit a middle ground between the iPad's 9.7-inch (24.6-centimeter) screen and the HTC Flyer's 7-inch (17.8-centimeter) screen. Unlike its competitors, the Sony S1 will deviate from the rectangle mold by being more rounded and slightly thicker on one end. This will result in a profile that looks a bit like an exclamation mark [source: Cowley].

The S2 will have a dual-screen design. It will be hinged in the middle and, when flipped open, reveal two 5.5-inch (14-centimeter) screens. The screens are designed to be used together as one large screen, or the bottom screen can be used as a touch-activated keyboard in conjunction with the top screen. When closed, the S2's rounded, compact design is reminiscent of an eyeglasses case. As of August 2011, Sony had not released the S2's exact dimensions, but early reviewers say it's small enough to fit in a pocket [source: Nusca].

Both the S1 and S2 are slated to have WiFi and 3G/4G cellular capabilities, and it's been rumored that AT&T will act as the cellular service provider for both tablets in the U.S [source: Ricker, Sony].

The models also will differ when it comes to built-in camera and video function. The S1 will have two cameras for still photographs and video; one will be on the front and the other will be on the back of the device. The dual-screen S2 will have only one camera positioned on the back of the device that can toggle between video and still photography.

Sony hasn't released information on how much the tablets will cost. However, if the company's pricing strategy follows the crowd, it's estimated that a no-frills Sony tablet will cost about $500, like most of its competitors.

Although Sony's designs will differentiate their tablets from competitors, the Sony tablets weren't really designed to beat out the iPad. Find out why on the next page.

Although some previewers of the S1 and S2 tablets are making feature-by-feature comparisons between the Sony tablets and the best-selling iPad, at least one Sony senior executive contends that the tablets were never meant to directly compete. In fact, Sony seems to be aspiring to the No. 2 spot for its tablets -- right below the iPad -- before the S1 and S2 have even been released [source: Reynolds].

Other non-Apple tablets, such as Samsung's Galaxy Tab, are expected to give Sony tablets some stiff competition. Like the S1 and S2, the Samsung runs on the Android 3.1 (Honeycomb) operating system, which is optimized for the larger screens that tablets sport.

And, like the Samsung tablet, Sony's S1 and S2 tablets will have WiFi and Digital Living Network Alliance (DLNA) connectivity. Devices that are DLNA-enabled can wirelessly stream digital content to each other, regardless of brand. For example, if both a tablet and television have DLNA capabilities, an operator can stream a movie from a Sony tablet to a television [source: Android Central].

The S1 and S2 will be available in 16G and 32G capacities, and both will have expandable memory slots -- something that may come in handy as users download additional apps from Android Market. The Sony tablets also will have a feature known as "QuickView." At first glance, this feature appears to make Web pages load faster. In reality, QuickView doesn't actually load the pages at a higher speed; it loads smaller files first. This means that users will see a page's graphics before the behind-the-scenes components, such as JavaScript, are fully loaded [source: Bohn].

Both of Sony's tablets are viewed as extensions of Sony's PlayStation-certified lineup, a series of products that are compatible with the gaming stations [source: Parrish]. In fact, the S1 and S2 will feature Nvidia Tegra 2 dual-core processors and allow users to play PlayStation One (PSOne) games adapted for Android, as well as games available in the PlayStation Suite. The PlayStation Suite is a Sony-run app store with downloadable games for Android tablets and phones, and is slated for a late 2011 release [source: Hollister].

The S1 and S2 tablets come with factory-installed software to download books from Sony's Reader Store, as well as music and videos from Sony's Qriocity service. The S1 and S2 tablets also will have infrared sensors so users can operate them as next-generation remotes, controlling other household devices like Sony Bravia Blu-ray players and televisions [source: Ionescu].

In the end, these unique features -- PlayStation compatibility, access to Sony's massive media collection and connectivity with other household items -- may be the underpinnings of Sony's tablet success.

Design an App, Line Your Pockets

The S1 and S2 tablets are still in the works, but Sony and Adobe already are challenging third-party developers to build apps for the Android-based devices. In fact, the companies have teamed up to award $200,000 in total cash prizes to developers who create innovative Adobe AIR apps using Adobe Flash Platform tools [source: AirAppChallenge].