How the T-Mobile Tablet Works 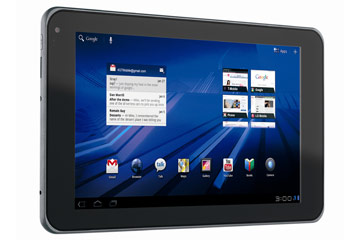 Certain things are just harder to do with a smartphone, like watch a movie or browse the Web. Enter the tablet. These slim, lightweight mobile broadband devices offer more agile systems and screens large enough to actually watch a movie without peering through a magnifying glass.

It's been equally interesting, however, watching companies scramble to add tablets to their retail lineups. Cellular phone provider T-Mobile's early 2011 offerings included the G-Slate, the Samsung Galaxy Tab and the Dell Streak 7. However, by July 20, 2011, T-Mobile had discontinued sales of the Dell Streak 7 and the Samsung Galaxy Tab seemed to be perpetually "out of stock" -- a shortage rumored to be linked to patent infringement legal proceedings between Apple and Samsung [source: Guirao]. Others point to the expected release of a new Galaxy Tab, version 8.9, in late 2011 [source: Boulton].

Along with the tablets, T-Mobile sells service contracts and prepaid plans so users can access its broadband network. There's also an option to purchased bundled WiFi access.

The entry-level G-Slate retailed for $699 as of August 2011, which made it pricier than the $500 iPad. However, when the G-Slate is purchased with a T-Mobile service contract, it often is sold at a discount of up to 50 percent [source: T-Mobile].

The G-Slate is built by LG Electronics, which sells it as the LG V-900. During the 1960s, LG produced Korea's first radios, televisions, refrigerators and washing machines [source: LG]. Today, it's a global company that still makes washing machines and other sundries, but has added mobile electronics to its offerings, including tablets like the G-Slate.

The G-Slate has an 8.9-inch (22.6-centimeter) screen, which sets it apart from the 10-inch (25.4-centimeter) iPad and 7-inch (17.8-centimeter) HTC Flyer. However, reviewers contend that LG's track record of producing electronics with high-end exteriors stops short at the G-Slate, which has a plastic back with a swipe of aluminum for detail. They're quick to compare this to the iPad 2's slick, all-aluminum wrap. However, this flaw could easily be remedied by outfitting the tablet with a sleeve.

What really matters, in terms of performance and function, is what's under the hood. Find out what the G-Slate's sporting on the next page. 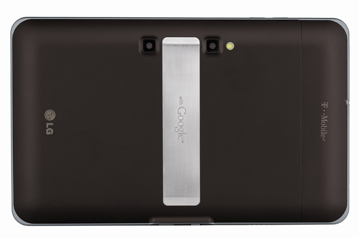 Note the dual cameras on either side of the aluminum strip.
Image courtesy of T-Mobile.

The G-Slate is slim and portable, and has -- for the most part -- solid inner-workings. The G-Slate runs on the Android 3.0 (Honeycomb) operating system, and it was one of the first tablets to do so. It's equipped with a 1GHz dual-core Nvidia Tegra 2 processor, which is powerful enough to handle multiple, simultaneously operating apps. It has a respectable 32GB of internal storage, but it doesn't have an SD slot to expand the tablet's memory. This could be a real drawback for users with app-heavy tendencies.

In addition to the usual roundup of features, like an e-book app and built-in office software, the tablet has another accessory worth noting: red/blue 3-D glasses to wear while playing back 3-D video. Some critics say 3-D is just a gimmick, however, and that the cameras produce grainy photographs and video [source: Hiner].

The G-Slate comes with the T-Mobile TV app, which can be used to watch free television shows from nine different channels. There are reports that the selection is thin and that the resolution is nothing to write home about, but consumers can access additional free or paid on-demand content via the app. Users also can visit the Android Market to buy more apps [source: Stevens]. Because the G-Slate is Flash compatible, the free Flash app might be one of the first users will want to nab -- with it, they can view Flash-enabled content on Web sites, and it's a necessary component for some online games [source: Nguyen].

The G-Slate has a battery life of approximately eight hours, which is about average among tablets [source: Stevens]. The Apple iPad, in comparison, has a 10-hour battery life.

So how does the G-Slate stack up to competitors overall? It's an all-around solid tablet for people who like to dabble in multiple applications, from game playing to amateur filmmaking, but critics are already looking forward to the release of an improved version.