What kinds of shopping activities are happening on mobile devices? 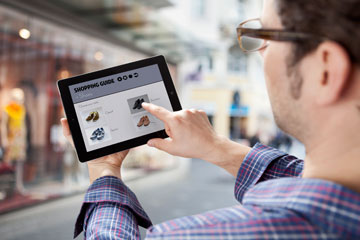 There are lots of ways to shop on tablets and smartphones, including through apps or Web sites optimized for mobile devices. To draw in would-be shoppers, some companies are offering apps for mobile devices that more closely resemble magazines or catalogs than they do traditional retailer Web sites. These allow the user to do the virtual equivalent of window-shopping, as well as create wish lists and make purchases, sometimes with even more ease than Web sites due to the high level of interactivity allowed by the touch screen. Not all retailers have apps or mobile sites, but this will likely change as more and more people shop on their devices.

There are other types of apps that aid customers in their shopping activities. Digital wallets allow users to store their financial information, including credit and debit cards, and use their phones to make purchases in stores in lieu of what would normally be in their wallets. These most commonly use a technology called near-field communications (NFC), which is built into some, but not all, smartphones. It allows you to tap your phone on another NFC device to exchange information and make a payment. Google Wallet is the most well known, but there are offerings from Square, Visa, MasterCard and others. Digital wallets have not taken off quite yet, likely due to the rarity of NFC devices, scant knowledge of these services and safety fears, but they may be the wave of the future. As of 2013, iPhones do not have NFC, but Apple is reportedly working on incorporating NFC or a similar technology into upcoming iPhone models.

Apple does, however, have a Passbook app that allows you to store and use various participating retailer's loyalty cards. Some retailers have their own loyalty apps, and digital wallets can also serve this function. Deal sites like Groupon also have apps that let you redeem digital coupons.

You can use your mobile device during in-person shopping trips in other ways, too. People commonly use their smartphones to comparison shop while wandering brick-and-mortar stores. There are, of course, apps for this. They allow you to do everything from scan the barcode to photograph the item to speak or type its name, and will return other retailers' prices, reviews and product information. Or you can simply surf the Net and find prices and reviews.

So there are lots of ways to shop on your phone or tablet. But is it entirely safe?