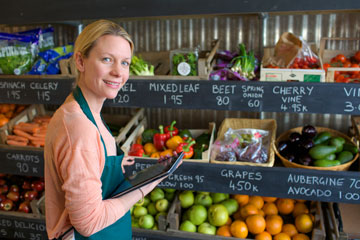 Many physical stores are embracing tablet technology to manage inventory, order supplies, and in some cases, even process sales transactions.
© Frank van Delft/cultura/Corbis

Some think online shopping is sounding the death knell for physical stores, but that might be a bit premature. E-commerce on tablets and phones is growing, but sales at brick-and-mortar stores still outnumber online sales via any device. According to a study by research firm Forrester, although over half of consumers are making some purchases online (and these sales total hundreds of billions of dollars a year), in 2012 e-commerce accounted for only 7 percent of all retail. It's expected to reach just 9 percent by 2016 [source: Indvik].

Some traditionally online-only sites are even finding that customers want to see, touch and try physical items in person, or that they want to have the physical and social experience of going on a shopping trip. Several are opening physical stores. But these aren't quite throwbacks to traditional shops with clunky cash registers and tons of merchandise in the back. They're using some of the online paradigms to make things more efficient, like carrying less inventory, having smaller floors and fewer staff members and using the store as sort of a showroom for items that you can get in a wider variety online. Some are also using their existing warehousing and distribution methods to ship to their own stores rather than straight to customers. Even online giant eBay is testing out temporary stores, albeit ones where you can only peruse items on a screen.

Many existing brick-and-mortar retailers are also incorporating some of the conveniences that make online shopping both possible and pleasant, like in-store search capabilities via computers, touch screens or kiosks, some of which also let you order online when you can't find what you're looking for in the store. Lots of retailers now also offer the ability to order merchandise online and pick it up at a local store. This service can be used to ship gifts to others and to avoid shipping hassles and expenses.

Tablets, as well as smaller devices like the iPod touch, are becoming fixtures in stores, allowing staff members to move about more freely while helping customers search for merchandise information or even checking them out. Systems have been developed that let retailers ditch their cash registers and ring up sales on a mobile device with a card reader. There are even retailer apps being tested that let customers ring themselves up.

The digital age is definitely causing retail to evolve, and we can now buy a great many things from just about any location with the use of our fast-improving computing devices. But the majority of us are unlikely to do all our shopping in our pajamas anytime soon.

Author's Note: Are tablets changing the way we shop?

Shopping in the middle of the night on a tablet from bed is a weakness of mine. I'm especially vulnerable to the daily deal and t-shirt sites in the wee hours of the morning when insomnia has me, so I can see how and why people spend more on their tablets than phones. It's easier to leisurely peruse the big pretty images and read pages of product information on a tablet than on a phone. Not to mention the larger virtual keyboard.

The phone, however, really does come in handy for review reading and comparison shopping while wandering around a store. It has kept me from making many an in-person impulse buy and aided me in making more informed decisions on what I do end up purchasing. My Consumer Reports subscription helps, too, and more often than not, I log into it via my phone while I'm looking at electronics.

Researching this article has verified that I am a statistic, and possibly a shopaholic. For the good of my finances, perhaps I need to concentrate on more productive uses for my mobile devices, like money management, gaming or e-book reading. Although those generally require purchases, too.