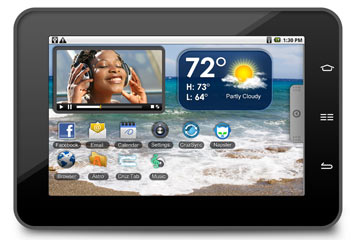 Velocity Micro offers an affordable option with its Cruz tablets, including the Cruz T103 model, which costs hundreds of dollars less than some higher-end tablets.
Image courtesy of Velocity Micro

Fast food chain Taco Bell launched an advertising campaign in 2006 promoting the fourth meal, that food you just might need between dinner and breakfast and outside of the recommended allowance of three meals a day. You could look at tablets to be a kind of fourth meal of computing -- between a notebook or laptop and smartphones or other portable devices. Tablets aren't quite as necessary as desktops and laptops, but they do fill a need many didn't even know they had until they had the option to get one -- much like a 3 a.m. burrito.

Marketing and innovation have a lot to do with the explosion of tablet sales since 2010, and some users have replaced computing staples like notebooks, PDAs and even PCs with tablets, making them less a novelty or accessory option and more of a main meal. Even Mark Dean, the chief technology officer at IBM, announced "my main device is now a tablet" in August 2011.

Velocity Micro, Inc., however, provides a more affordable option with its Cruz tablets. With models costing hundreds of dollars less than some higher-end tablets, the Velocity Cruz devices fall within the "mass-market tablet space" [source: Pierce]. When Apple launched its iPad in early 2010, it sold 3 million units in the first 80 days at a price of $499 to $699 [source: Apple Inc.]. Coming fast on its heels, Motorola, Samsung, HP, and just about anyone in the computing game started releasing their own tablets in a price range similar to Apple's iPad. In the fall of 2010 Velocity Micro, known more for high performing desktop and laptop computers than mass-market devices, introduced the Cruz Tablet, and at a cost of $299, it made news for its price point maybe more than for its selling points.

Velocity Cruz tablets are recognizable as tablets, those (mostly) non-phone, not exactly computers with an interface right on the screen -- a kind of smallish notebook but without a standard keyboard or lid display and closure -- but are they in the same consumer space as the iPad or other tablets? Are they trying to be? Do they have the velocity of the higher priced forerunners?

In other words, do Velocity Cruz tablets have enough meat to meet tablet buyers' needs or are they more of a tablet-lite snack? We'll look at what goes into the Cruz tablet next.

Both Cruz Tablet models have touch screen navigation displays, SD and SDHC memory cards, Wi-Fi capabilities, and audio and video playback for MP3, AAC, WAV, MPEG-4 AVI and MOV formats, although the T103 also handles WMA audio and H.264 video. The T103 also has 512 MB of RAM, which is twice as much as the T301's 256 MB. Another difference is in the aspect ratio of each tablet, that number indicating how much images are scaled down for optimal viewing on a handheld or tablet. At a ratio of 4:3 for the Cruz T301 and 16:9 for the T103, the models fall within the standard preferences for many tablets on the market [source: Burnette].

A few important features of both tablets include the operating system, battery life and storage. Cruz tablets are powered by Android, the operating system designed by Google (though Microsoft claims royalties for Android use) and are compatible with Google applications. While the Cruz T301 has the 2.2 Android OS (also called "Froyo") the T103 Cruz Tablet runs off the 2.0 Android operating system.

There is a tablet-specific 3.0 Android operating system (also known as "Honeycomb") featured on tablets by other manufacturers -- the Motorola Xoom, for example. The earlier Android versions were designed for phone and handheld devices, whereas the 3.0 is designed specifically to fit the screen and resolution of tablets. However, just like many PC users still run older versions of Microsoft operating systems, the 2.0 and 2.2 Androids are more than capable of powering the Cruz tablets. Samsung's Galaxy Tab and others use the Android 2.2, as well.

Battery life for both Cruz tablets is good, with some reviewers finding that it exceeded the six to 10 hours of use advertised. Most reviewers rate this as a strength of the Cruz tablets, and even in negative reviews of other Cruz tablet features, battery life fairs well.

Storage is a less competitive feature, however, and Cruz devices have noticeably less to offer in this area than many other tablets on the market. The Cruz T103 has 1 GB of storage built in and includes 4GB and 8GB secure digital memory cards, and the T301 has 2 GB built in and includes a 4GB memory card. This is a significant amount of memory, however most tablets on the market, including the iPad and Xoom, offer 16 to 32 GBs internal storage alone.

A Cruz Reader is also available and has many features in common with the tablet models, including 10 plus hours of battery life for reading, watching videos, listening to music or surfing the Web, but with just 256 MB of memory.

Next we'll look at what can Cruz tablets do and whether they can do it fast.

What can Velocity Cruz tablets do?

Cruz tablets stand out from similar devices mainly because of their low cost, but they do offer what most tablet users look for: the ability to browse the Web, listen to music, send and receive e-mail, view photos, log onto Facebook, watch videos and movies, play games and read books.

All of the tablets come preloaded with a variety of apps, including Facebook, ASTRO (for managing files), a Web browser, Cruz Sync (for wireless storage) an e-mail app and Office Suite and several more. One other app, the Cruz Market, offers about 30 additional free apps, including one for the Amazon Appstore for Android. Amazon offers thousands of apps and is in competition with the Google Android Market. However, Velocity Micro devices can't access Google's Android app offerings, which is frequently something mentioned as a downside of the Cruz Tablets.

Despite the fact that the tablets are loaded with apps, and have access to thousands more, their downfall could be the way the tablets handle some applications. A 2011 CNET review found that downloading apps and games didn't always work and graphics weren't handled well by the Cruz T301 tablet. Additionally, speed was singled out as the "worst strike" against it, earning it the description "sluggish." Overall, the Cruz T301 earned 2.5 out of 5 stars [source: Bell]. In its roundup of "Best Budget Tablets" in July 2011, Cruz didn't make the top five, however, two of the top five earned only three-star ratings, making the Cruz tablet just shy of the number five spot landed by Archos, which was also described as "sluggish" [source: Bell]. Maybe a lower price point means sacrificing speed and graphics capabilities, but those are most noticeable when gaming and accessing image-intensive apps, and tablets do much more for the average user.

So how does the Velocity Cruz fare with e-reading and communications, and are the consumer reviews more than fair for this fair-priced tablet? We'll look at how it looks and feels, next.

eReader or Tablet? iOS or Android?

If you're buying a tablet, it might be worth exploring e-readers. Some offer the same functionality of tablets at a lower price. Cruz Reader has technical specs very close to its tablets, and Barnes and Noble's Nook Color, for example, is one e-reader reviewed favorably alongside tablet devices [source: Bell]. And while the specs of some readers and tablets can be pretty close, their operating systems aren't. Android and iOS are two choices with separate followings, with Apple's iPad being the most noteworthy iOS example and devices from Samsung, Velocity Micro and others using Android power.

Design and Usability of the Velocity Cruz Tablet 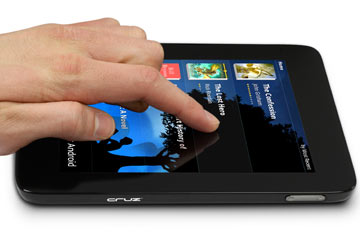 The Cruz T103 has 1 GB of built-in storage and includes both 4GB and 8GB secure digital memory cards for additional storage.
Image courtesy of Velocity Micro

In taking a first look at Cruz tablets or other 7-inch tablet models, the difference in size next to a 10-inch model like the iPad is noticeable. Having a smaller screen does affect readability and navigation, but for many who are fluent on tiny smartphones and notebooks, it might not be an issue. For some, the 7-inch size is preferable as long as the screen is user-friendly and easy on the eyes. Cruz tablets provide a pretty typical sort of paperback quality read both in size and resolution and as an e-reader its price point could be the deciding factor among similar tablets.

Velocity Cruz tablets also feature capacitive touch-screen displays that are meant for finger navigation only and can't be used with stylus or pen accessories. Capacitive screens respond to the electric charge of skin on display contact and how the pressure measures across the surface and beneath, leading to navigation at the software level. Screen layout is straightforward, and Cruz tablets come with an app called ASTRO that helps customize file management and app access. As with any tablet, whether or not you can use the device for typing long documents or messages depends a lot on the comfort and speed of the user in adapting to the much smaller on-screen keyboard and sensitivity of keystrokes.

Specialty tech reviewers have taken a look at Velocity Cruz tablets and many consider them a solid choice among tablets, even if they aren't in the five-star, jaw-dropping bells and whistles category. Purchasing a tablet whether to replace or supplement the machines you already have means making a decision within a price range of several hundreds of dollars from high-end to low-end, and Velocity Cruz tablets, at the low-end in price, offer a lot within the tablet space. Being realistic about the differences in a $149 versus a $699 device and how much bang you need for your buck will help narrow the choices, and taking a test touch or touch drive at a retailer can give you a feel for the design and velocity of the Cruz tablet.

Want more information on tablets? Keep reading for links to other articles on the next page.