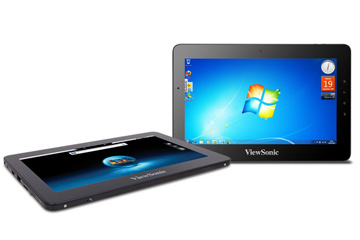 The dual-OS ViewPad 10pro is just one of five tablet offerings from ViewSonic.
Image courtesy of ViewSonic.

In 1968, "2001: A Space Odyssey" -- co-written by director Stanley Kubrik and author Arthur C. Clarke -- depicted two astronauts using an electronic slate to stream a video broadcast wirelessly [source: Gullo]. It was a far-fetched idea at the time. After all, people were still using landline telephones. With cords.

Fast-forward 40-some years and the slate-style tablet is a part of many people's personal computing arsenals. With each new entry into the tablet race, the competition increases as manufacturers vie to differentiate their offerings with unique features. Companies like ViewSonic, which has been producing a tablet line since 2001, strive to reinvent the wheel -- or at least to put a spinning rim on it -- each time they launch a new version.

ViewSonic was founded in 1987 as Keypoint Technologies. Based in Walnut, Calif., the company initially manufactured and sold computer peripherals like keyboards. In 1990, ViewSonic's focus shifted to color computer monitors and other mid-priced visual display products [source: ViewSonic]. In 2002, ViewSonic released its first tablet, the ViewSonic Tablet PC VC1100, with a $1,995 price tag [source: ViewSonic, Newman]. At the time, it was believed to be a bargain.

The ViewPad 7 and ViewBook 730 have 7-inch (17.8-centimeter) screens. Priced around $300 and $250, respectively, these tablets undercut direct competitors like the $500 HTC Flyer and Blackberry PlayBook, and offer enticing options in comparison to similarly priced e-readers as of late 2011 [source: Orqula].

ViewSonic's larger tablets -- the ViewPad 10pro, ViewPad 10 and gTablet -- all sport 10.1-inch (25.7-centimeter) screens. The gTablet is designed primarily for light consumer use -- Web browsing, checking e-mail and playing games like Angry Birds -- and was priced at about $225 as of late 2011. ViewSonic released the ViewPad 10pro in August 2011, priced from $599 to $699 depending on the options you choose. Unlike the ViewPad 10, which has features for gaming and basic office use (and runs at least $100 cheaper as of late 2011), the ViewPad 10pro is designed for business professionals who need to access and use office software on the go.

So how do the ViewSonic tablets stack up to the competition when it comes to what's under the hood? For some, the tablets' internal workings are a mixed bag. Find out why on the next page. 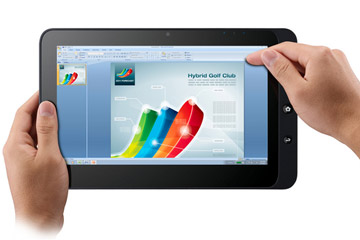 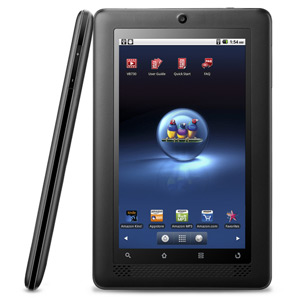 The ViewBook 730 is the least expensive of ViewSonic's tablet offerings.
Image courtesy of ViewSonic.

ViewSonic tablets have access to the well-stocked Android Market and Amazon App Store. What operating systems will consumers be purchasing those apps for, you ask?

ViewSonic's gTablet, ViewBook 730 and ViewPad 7 all run on Google's Android 2.2 (Froyo) operating system. Proponents like Froyo because it offers faster downloads, app functions and Web browsing than 2.1 (Eclair). In addition, Froyo supports Adobe Flash. (Apple users frustrated with the iPad's inability to access some interactive Web content know why this is a big deal.) Critics contend that even though Froyo offers several improvements over Eclair, it's still clunky to navigate and not fully integrated with useful apps. They say an upgrade to Android 3.2 (Honeycomb), which is optimized for tablets' memory-sucking screens and for multi-app use, might be a better OS choice -- which may be part of why the upcoming ViewPad 7x will run on Honeycomb [source: Buchanan, Orquia].

The ViewPad 10 and ViewPad 10pro's dual operating systems marry fun and function; Android is known for its gaming and social networking capabilities, while having Windows and other Microsoft software on a tablet could allow users to take their work places where even the slimmest laptop feels clunky. However, Windows 7 was designed to work with keyboards, not touchscreens, and some reviewers have said that Windows 7 is inferior to its competitors when it comes to virus protection because it requires the addition of antivirus software -- and when such a program is running in the background, it slows the performance and saps the battery life of a tablet [source: Chen].

The ViewSonic tablets feature various built-in sensors like accelerometers (devices that sense and measure movement and vibrations) and G-sensors, which change the screen from landscape to portrait as the tablet's orientation changes. These add an interactive layer to motion-sensitive games. When playing "Need for Speed: Shift," for example, the tablet can be turned like a steering wheel to control a car. If Kubrick and Clarke imagined that, too, they kept it to themselves.