Browse the article How Ubiquitous Networking Will Work 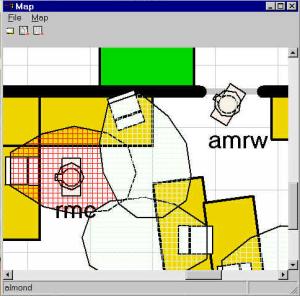 This diagram shows how users and objects will have zones that activate the objects as a user approaches them.
Photo courtesy AT&T Laboratories Cambridge

Mobile computing devices have changed the way we look at computing. Laptops and personal digital assistants (PDAs) have unchained us from our desktop computers. A group of researchers at AT&T Laboratories Cambridge are preparing to put a new spin on mobile computing. In addition to taking the hardware with you, they are designing a ubiquitous networking system that allows your program applications to follow you wherever you go.

By using a small radio transmitter and a building full of special sensors, your desktop can be anywhere you are, not just at your workstation. At the press of a button, the computer closest to you in any room becomes your computer for as long as you need it. In addition to computers, the Cambridge researchers have designed the system to work for other devices, including phones and digital cameras.

As we move closer to intelligent computers, they may begin to follow our every move. In this edition of How Stuff WILL Work, we will look at the parts of such a system and how they allow our data and information to move with us.

Send Out the Bat Signal 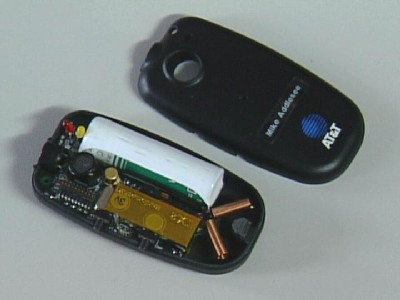 In order for a computer program to track its user, researchers had to develop a system that could locate both people and devices. The AT&T researchers came up with the ultrasonic location system. This location tracking system has three basic parts:

Users within the system will wear a bat, a small device that transmits a 48-bit code to the receivers in the ceiling. Bats also have an imbedded transmitter which allows it to communicate with the central controller using a bidirectional 433-MHz radio link.

Bats are 3 inches long (7.5 cm) by 1.4 inches wide (3.5 cm) by .6 inches thick (1.5 cm), or about the size of a pager. These small devices are powered by a single 3.6-volt lithium thionyl chloride battery, which has a lifetime of six months. The devices also contain two buttons, two light-emitting diodes (LEDs) and a piezoelectric speaker, allowing them to be used as ubiquitous input and output devices, and a voltage monitor to check the battery status.

A bat will transmit an ultrasonic signal, which will be detected by receivers located in the ceiling approximately 4 feet (1.2 m) apart in a square grid. There are about 720 of these receivers in the 10,000-square-foot building (929 m2) at the AT&T Labs in Cambridge. An object’s location is found using trilateration, a position-finding technique that measures the objects distance in relation to three reference points.

Trilateration works by measuring the distance from the bat worn by the user to three sensors in the ceiling. Researchers can locate a user's position to within 1.18 inches (3 cm).
Photo courtesy AT&T Laboratories Cambridge

If a bat needs to be located, the central controller sends the bat’s ID over a radio link to the bat. The bat will detect its ID and send out an ultrasonic pulse. The central controller measures the time it took for that pulse to reach the receiver. Since the speed of sound through air is known, the position of the bat is calculated by measuring the speed at which the ultrasonic pulse reached three other sensors. This system provides a location accuracy of 1.18 inches (3 cm) throughout the Cambridge building.

By finding the position of two or more bats, the system can determine the orientation of a bat. The central controller can also determine which way a person is facing by analyzing the pattern of receivers that detected the ultrasonic signal and the strength of the signal.

With an ultrasonic location system in place, it’s possible for any device fitted with a bat to become yours at the push of a button. Let’s say the user leaves his workstation and enters another room. There’s a phone in this room sitting on an unoccupied desk. That phone is now the user’s phone, and all of the user’s phone calls are immediately redirected to that phone. If there is already someone using that phone, the central controller recognizes that and the person using the phone maintains possession of the phone.

The central controller creates a zone around every person and object within the location system. For example, if several cameras are place in a room for videoconferences, the location system would activate the appropriate camera so that the user could be seen and move freely around the room.

When all the sensors and bats are in place, they are included in a virtual map of the building. The computer uses a spatial monitor to detect if a user’s zone overlaps with the zone of a device. If the zone’s do overlap, then the user can become the temporary owner of the device.

If the ultrasonic location system is working with virtual network computing (VNC) software, there are some additional capabilities. Computer desktops can be created that actually follow their owners anywhere with in the system. Just by approaching any computer display in the building, the bat can enable the VNC desktop to appear on that display. This is handy if you want to leave your computer to show a coworker what you’ve been working on. Your desktop is simply teleported from your computer to your coworker’s computer. 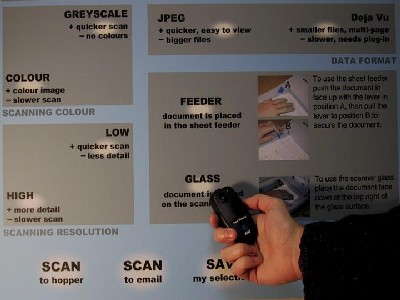 A smart poster will have buttons printed on to it that can be triggered by a bat.
Photo courtesy AT&T Laboratories Cambridge

Once these zones are set up, computers on the network will have some interesting capabilities. The system will help us store and retrieve data in an "information hopper." This is a timeline of information that keeps track of when data is created. The hopper knows who created it, where they were and who they were with.

Think of the hopper as a ubiquitous filing clerk. It will change how we think of our computer filing systems. By using a digital camera that is connected to the network, a user’s photographs are immediately stored in his or her timeline. Tape recorders could also send audio memos to the information hopper.

Two items of information created at the same time will be found at the same place on the timeline. The system knows who the user was with when he created the data, and the various timelines of the users working together. This way another timeline can be created to keep track of particular projects.

Another application that will come out of this ultrasonic location system is the smart poster. A conventional computer interface requires us to click on a button on our computer screen. In this new system, a button can be placed anywhere in your workplace, not just on the computer display. The idea behind smart posters is that a button can be a piece of paper that is printed out and stuck on a wall.

Smart posters will be used to control any device that is plugged into the network. The poster will know where to send a file and a user’s preferences. Smart posters could also be used in advertising new services.To press a button on a smart poster, a user will simply place his or her bat on the smart poster button and click the bat. The system automatically know who is pressing the poster’s button. Posters can be created with several buttons on it.

Ultrasonic location systems will require us to think outside of the box. Traditionally, we have used our one computer at work to store all of our files, and we may back up these files on a network server. This new ubiquitous network will enable all computers in a building to transfer ownership and store all of our files in a central timeline.