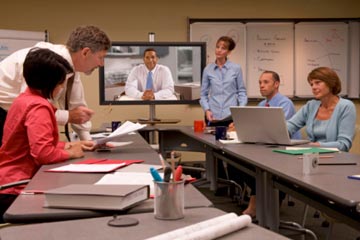 Too many applications can lead to communication latency.
B Busco/Getty Images

Up until now, unified communications might seem like a no-brainer. For most organizations, significant results can be achieved with minimal effort -- on the surface, anyway. These cool features aren't without complications, and the tech sector has worked for decades to overcome them. For example, the data industry faces the hurdle of routing VoIP calls from the Internet to a regular phone number as smoothly as land lines. Though hosted VoIP services don't provide call control (the name for call routing, both behind the scenes and on the consumer's end), some interfaces allow users to control phone calls from the computer desktop. According to Dave Gilbert, founder of call control app maker SimpleSignal, research showed that a lot of VoIP users ignored familiar features like voice messaging, call forwarding and speed dial because the programs were confusing and often required a Web browser to run in the background, making it easy to overlook calls and other notifications [source: TMCnet]. Despite these issues, Google's vice president of product management, Bradley Horowitz, told eWeek the goal of telephony is to be seamless, which is essential if it's to play a critical role in UC [source: Boulton].

Face a desktop cluttered with all the UC applications we've discussed, and it's easy to get overwhelmed. This can lead to communication latency, which analyst Sagee Ben-Zedeff describes as the "negative effect on our effectiveness that is caused by having to deal with too many means of communications. By using one platform, with one interface, to access all those means, either explicitly or implicitly, that latency is reduced if not eliminated" [source: Ben-Zedeff]. An interesting effect of overcoming communication latency is the expectation that contacts will be available. Some chat and message platforms, such as Google Chat, allow status messages that indicate availability and willingness to talk, which is known as presence information. To alleviate privacy concerns, many apps also allow status blocking, so contacts can't see if someone is online [source: Good].

You may use a smartphone to juggle telephone calls, text messaging, e-mail and Web browsing. How do they fit into unified communications?