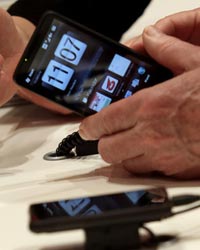 An early draft of this article was researched and typed on a smartphone. New versions were sent via e-mail and immediately arrived back on the phone, in the e-mail inbox. Anytime the author made changes or found new research, the most recent update could be retrieved at any time, not just on the phone but on any computer with Internet access. A writer interacting with her own words isn't the same as tracking down a friend or conducting a business meeting, but the ease and convenience of instant text-based communication can blur the line. The phone in this scenario proved to be invaluable for a writer who spends several hours a day on public transportation.

The smartphone is making strides in its reputation as an inexpensive solution for a communications platform. In addition to a smartphone's telephone functions, standard features usually include e-mail, text/SMS messaging, e-mail and Web browsing. Smartphones also boast an address book, which doesn't sound impressive -- maybe it conjures imagery of a grubby little pad of paper forever lost in the kitchen junk drawer. But smartphones are a key platform for social networking features, and the more we use them, the more useful the address book becomes. Contact information from a lot of social applications, such as Facebook, can be synced on the go.

Smartphones are loaded up with social networking programs, features that blur the line between business and personal interest, such as Google Apps, and intellectual property saved as data. Communications providers realize that their target market is already accustomed to (or dependent on) using smartphones and are making the most of the opportunity. In some cases, existing users don't even need to invest in new hardware. German firm ANDTEK provides UC solutions that allow companies to access all of their business functions from any smartphone that meets current technological standards, without extensive modifications [source: PRLog].

So, once you've got your pocket-sized device filled with confidential business secrets and sensitive contact information, how can you possibly carry it around? Well, some mobile phone manufacturers are aggressively pursuing business customers with high-tech security features to protect all that valuable data. The Nokia E71, for example, features data encryption for the phone's internal memory and removable memory cards. The Apple iPhone can be locked or erased remotely if it's lost or stolen. LG's eXpo has fingerprint-based security [source: Weinschenk]. As the smartphone's ability increases to perform most of the communications tasks of a desktop computer, don't overlook its potential as an integral part of business communications.

Professional dependence on UC is pushing the technology to new and interesting places. On the next page, we'll discuss why local data storage might be going the way of standard messaging.