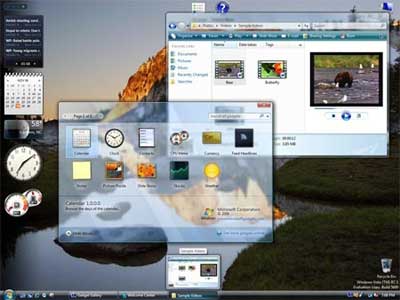 Windows Vista's desktop environment requires considerably more computer resources than previous versions of the OS. For this reason, and to make the OS more stable, Vista's graphics subsystem is different from its predecessors.

First, Windows Vista uses a new graphics driver model, known as the Windows Display Driver Model (WDDM). Previous Windows graphics drivers ran in kernel mode. They had direct access to the graphics hardware, and their performance could affect the operating system. This is why graphics errors could cause the entire system to stop responding. WDDM, however, runs primarily in user mode. It has little direct access to the graphics hardware or to critical parts of the operating system. Microsoft instituted a similar change to Vista's audio subsystem as well. These changes should help make the OS more stable.

The WDDM manages the workload of the graphics processing unit (GPU). It allocates the video memory required for different tasks, and it prioritizes applications that need access to the GPU. In other words, it helps budget the computer's video processing resources. This is particularly important, since the OS and applications that use lots of 3-D graphics have to share the computer's graphics resources.

A driver called the Desktop Window Manager (DWM) is part of the WDDM. This driver is responsible for updating what you see on the desktop. The DWM draws all of the objects you see on your screen and holds them in a buffer until you need them. By keeping different desktop views in a buffer, the DWM should help prevent the blank square of space that often appears when programs stop responding. The DWM creates the thumbnails used in Flip and Flip-3D, and it can scale on-screen images to fill high-resolution monitors.

Although the WDDM is central to creating the windows you use to access your applications, it doesn't communicate with those programs directly. Instead, it interacts with programs through an application programming interface (API). APIs help hardware and software communicate more efficiently by providing sets of instructions for complex tasks. Windows Vista can use DirectX 9 as its API, although a new version, DirectX 10, is a built-in, exclusive part of the OS.

All this 3-D rendering requires lots of processing power. To use Aero and some of the more hardware-intensive features of Windows Vista, a computer must be Premium Ready. It has to have enough system and graphics memory to handle constant creation and manipulation of 3-D images. This is why the requirements for a Premium Ready computer sound like what you'd expect from a 3-D game. It must have:

The computer also has to support DirectX 9, have a DVD-ROM drive and have access to the Internet. Microsoft has a list of all of the necessary components for a Premium Ready system.

If you're considering upgrading to Windows Vista and want to use the Aero interface, you should keep in mind that these are the minimum requirements. If your computer meets exactly these specifications, it will be able to create the 3-D interface. However, it may bog down if you're multitasking or playing image-intensive games. If you hope to run Vista on a laptop or a desktop that doesn't have a dedicated video card, you may find that the GUI's benefits don't outweigh the strain it puts on your system resources. To get optimal performance from the Aero user interface, a computer needs to exceed the minimum recommendations, including a separate video card with its own graphics memory.

Microsoft has published different minimum requirements for computers using the basic interface. They include:

Microsoft has also made some changes to how Vista handles networking and security. We'll look at these changes in the next section.

Cap Bits and Changing the Volume

Previous versions of DirectX used capability bits, or cap bits, to describe different DirectX features. Hardware did not necessarily have to support all of the cap bits to be DirectX compliant. For this reason, video cards and other components didn't always work properly even if they were DirectX compliant. DirectX 10 does away with this system, designating only three features as optional.

You may have had the experience of trying to talk to someone over IM while listening to music on your computer. Sometimes, your choices are to hear your IM notification sounds blaring over your music or to turn them off entirely. Windows Vista eliminates this issue by allowing people to change the outbound volume of each application. 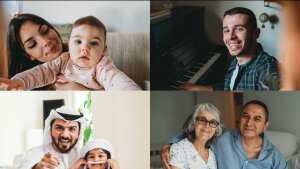