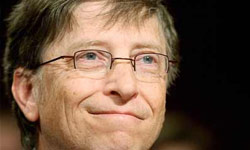 The initial Internet gold rush ended abruptly, destroying many startups and established online businesses alike. But the Web richly rewarded businesspeople with the savvy to foresee technology trends and beat competitors to the next big score. For these whizzes, the Internet has bloated their bank accounts to extremes.

You may notice some famous names missing from this list. Bill Gates, Larry Ellison and others have also proven their business acumen and cemented themselves as owners of radical wealth. But they made money on computer software and hardware, not just the Internet. Instead, this list focuses on the eager youngsters who harnessed the wild, unpredictable ways of the Web and steered their way to consistently outrageous profits.

It's no surprise that household names such as Google and eBay have contributed to many early retirement funds. Thus, you won't be shocked by some of the names and companies on the following pages. However, you may be amazed at just how wealthy some relatively young businesspeople have become, and how little time it took them to get there. Keep reading to see how the Internet's star players made their fortunes, and to see just how big their Web-fueled piles of cash have become. 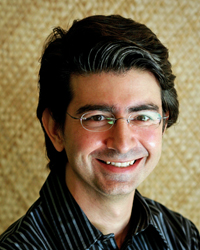 Pierre Omidyar made a fortune by starting eBay and now spends much of his time working on philanthropy projects.
Allison V. Smith

Computer programmers are often known more for their coding capabilities than their business expertise. Pierre Omidyar happens to understand a lot about both. He demonstrated skillfulness in both realms by creating eBay, the online auction site that's driven his wealth to more than $3.6 billion.

In 1995, the French-born Iranian (who now resides in Hawaii) wrote Web code that let him put a laser pointer up for auction online. He didn't expect the item to actually sell, but when it did, Omidyar realized that the Internet auction concept might work.

More than a decade later, eBay is virtually synonymous with online auctions -- more than 80 million registered users access the site to buy and sell goods. You can find everything from handmade crafts, to electronics, to cars, to collector's items, all scattered across the globe, in just a matter of minutes.

The success of eBay convinced Omidyar to bring in a more experienced business mind. In 1998, Meg Whitman took executive control and guided eBay's initial public offering in September of the same year. Investors quickly infused the company with more than $60 million.

These days, Omidyar spends much of his time with the Omidyar Network, a philanthropy organization that donates hundreds of millions of dollars to non-profits working for social and economic change. 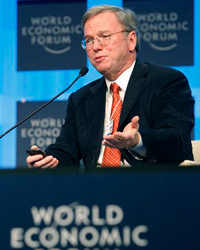 Google was founded and run by two graduate students in the late 1990s. Once the company hit the big time, though, they knew they needed more experience at the helm of their search engine behemoth. In Eric Schmidt, they found a man with the technological vision to guide a cutting-edge company, tempered with solid, real-world business experience.

In 2001, Schmidt joined Google as chief executive, charged with the mission of bringing clear direction to a company that had limitless opportunities. At nearly two decades older than the company's founders, Schmidt had a proven track record as a tech-sector executive. After completing an electrical engineering degree and a Ph.D in computer science, he'd worked for other heavyweights, such as Bell Labs, Xerox, Sun Microsystems and Novell.

Schmidt was well-known throughout Silicon Valley for his leadership experience. He is still noted for his strengths in Internet business strategies, and for his fearlessness in backing new and unproven technologies. His prowess isn't lost on others -- in addition to his duties at Google, he serves as a technology advisor to President Obama.

In 2004, Schmidt orchestrated Google's public stock offering. Those shares, which started at $85 each, blew past $600 each only three years later. The company's incredible success in the stock market made millionaires out of many Google employees, and Schmidt was a part of the action. He's now worth more than $4.4 billion, and thanks in large part to Schmidt, Google itself is valued at more than $140 billion. 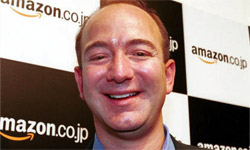 In the mid-1990s, when other entrepreneurs were trying to figure out how to use the Internet to make a buck, Jeff Bezos already had a pretty good vision of what was to come. And here's what he saw: a really big shopping mall.

Bezos spent a good chunk of his career making money with hedge funds on Wall Street. The lure of the Internet, though, drove him from the East Coast to Seattle, Wash., where he set up a business selling books online, right out of his garage. This was the humble starting point for Amazon.com.

Bezos wasn't a wild-eyed investor convinced that the Internet was nothing but a money-making machine. He'd studied both computer science and electrical engineering at Princeton. And he had a serious mind grounded in attention to the smallest details in business processes.

With Amazon.com, Bezos was sure he could turn a profit, even after enduring a couple of unsteady years. He tempted customers by the millions with steeply discounted products -- everything from soap to power tools -- and threw in free shipping, too. In just a few years millions of people who swore they'd never shop online were abandoning real-world shopping malls, en masse.

Bezos has so much cash that he decided to start another seemingly pie-in-the-sky company, called Blue Origin. The company seeks to privatize some aspects of space flight. Like Bezos' other big ideas, this one is catching on. In fact, NASA recently anted up millions of dollars to Blue Origin, just to see how high Bezos' newest business plan can fly. 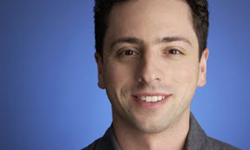 Sergey Brin's Russian parents saw almost no future for their son in the former Soviet Union. So when Brin was six, they emigrated to the United States in the hope that he'd make good on the promises of America. Brin didn't just meet his parents' expectations; he blew them up to Google-sized proportions.

In the 1990's Brin was a promising student who diligently pursued math and computer science studies. He was working towards his Ph.D in computer science when a chance encounter with Google's other half -- Larry Page -- left Brin intrigued. Page was working on a project analyzing the linking structure of the Web, but needed help from someone with a strong computer background and a high level of mathematical skill. Enter Brin.

Brin joined the project and was tasked with creating data mining systems that worked with Page's concepts. The two created a powerful search engine unlike anything the Internet had seen before, and it was an immediate success. With the blessing of their academic advisors, both dropped out of Stanford, gathered funds from angel investors and started Google in a garage.

The two began fine-tuning algorithms that helped Web surfers snatch the most relevant bits of information from sites all over the globe. Although those algorithms aren't public, they bear Brin's blend of computer savvy and mathematical acrobatics. Those traits have served Google, and Brin, very well. He's worth approximately $12 billion.

Brin still guides the technology division at Google. And now that he and Page have conquered the online world, they're both trying to save the entire planet. They've invested heavily in projects aimed at meeting planet-wide climate and energy challenges. 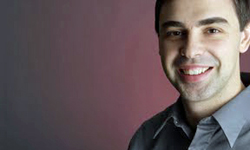 Larry Page's concept of how pages could be ranked in search made him a very rich man.
Courtesy Google

There's a good chance you found this article using Google. But even if you didn't, there's a very good possibility that you'll use the ubiquitous company's search engine or one its related products sometime today.

That should say a lot about this company's reach and impact in the online world. It all started with two guys -- Larry Page and Sergey Brin, the co-founders of this seemingly unstoppable Internet juggernaut. But the initial concept belonged to Page.

Page started as an engineering student at the University of Michigan and went to Stanford to work on his dissertation. He decided that his dissertation topic would focus on the Web, primarily because he was interested in the mathematics behind the Web's construction.

He was particularly fascinated in the way Web pages linked to each other, in essence citing each other as important reference points in what would otherwise be a chaotic and unreliable online world. He proposed an automatic program (called a crawler) that analyzed how many other sites linked to one site, and also the importance of the sites that linked to that site. The more important the links, the higher the PageRank.

When the concept proved successful, he and Brin realized the potential of their creation. They set out to create Google, with the intention of making all of the world's information universally accessible and useful.

Of course, Google search is a free service. So how did Page acquire more than $12 billion? In a word: ads. Google has two ad programs, called AdWords and AdSense. When you perform a Google search, AdWords advertisements are displayed on the right side of your search results. AdSense ads appear on other Web sites; Web site owners let Google display ads and Google pays that site owner a fee.

Marketing types at other companies pay money -- and a lot of it -- to display their ads through Google services. The end result is a search engine with so much cash that it can buy the best programming and business talent to perpetuate its success. In the process, Google employees such as Page make more than a little cash of their own. 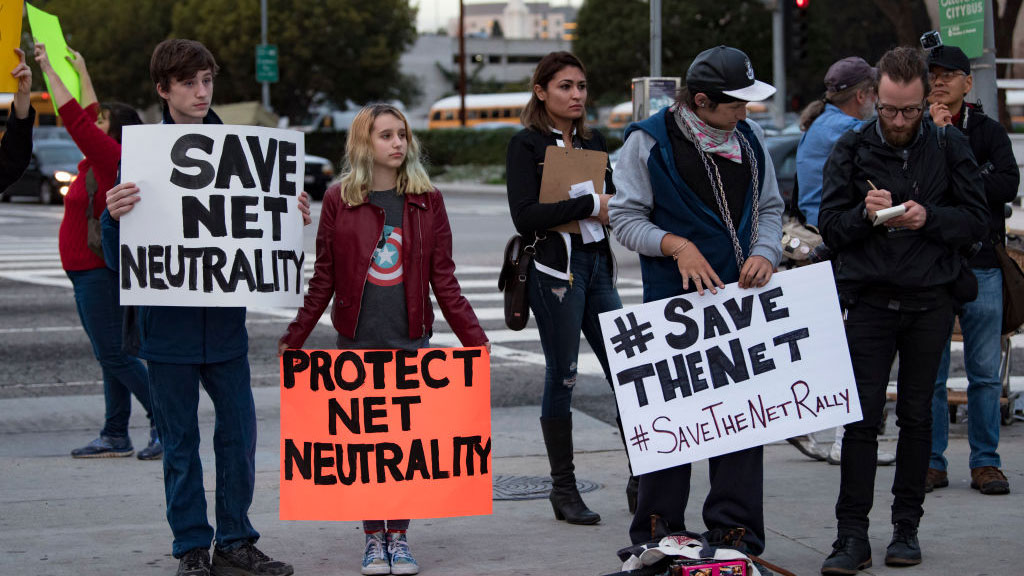