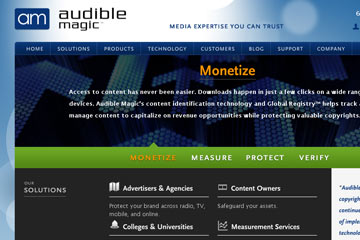 Unlike watermarking, digital fingerprinting never involves modifying a file. The most promising use of digital fingerprinting is preventive rather than tracking-based. For fingerprinting to work, software has to be able to accurately identify a piece of media and relate that file to an external database. To achieve this, fingerprinting software samples an audio or video file to pick out tiny portions of the file that are unique to that piece of media. Those samples could involve a handful of red pixels that make up a character's hat at the 57-minute mark of a movie or the exact pitch of a singer's voice 30 seconds into a song [source: Milano]. Those are extremely simplistic examples -- fingerprinting entails sampling multiple criteria to form an accurate representation of the media in question.

One major digital fingerprinting company, Audible Magic, works for huge content providers including NBC Universal, Sony Music and 20th Century Fox [source: Audible Magic]. Audible Magic boasts that its CopySense technology can identify the source of a video clip within five seconds of playback and can identify an audio file within 10 seconds. And supposedly, that's under any conditions. Not only is Audible Magic's software designed to identify a pristine copy of a movie, the company claims its software can recognize a piece of media that was, say, recorded off a movie theater screen with a handheld camera.

Identification is based on what Audible Magic calls "the perceptual characteristics of audio and video." The system is smart enough to see past transformative changes to audio and video files so that transcoding between file formats, equalizing audio, cropping an image or even blurring a picture can't fool CopySense [source: Audible Magic].

Does that mean Audible Magic can identify every piece of content on the Internet? Nope -- fingerprinting only works with media that has been analyzed and has a reference file uploaded to a database. That file contains all the perceptual characteristics Audible Magic uses to identify a song of video. Audible Magic's Global Rights Registry Database covers millions of files from its clients.

And that's the gist of digital fingerprinting as a means of copy protection. Up next: how a second kind of fingerprinting can track your identity online.