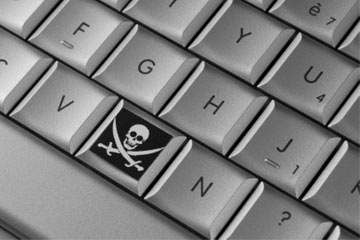 Digital fingerprinting of copyrighted content is great in theory, but does it really stop internet piracy?
©iStockphoto.com/Brasil2

Digital fingerprinting sounds like the perfect technology to combat Internet piracy. It prevents users from spreading copyrighted content and potentially bypasses the hassle and expense of lawsuits. Once implemented by an organization, digital fingerprinting is a largely automated system, which means less work for content providers and media sites alike. Of course, all that convenience assumes one critical thing: that digital fingerprinting actually works.

Digital fingerprinting must be able to identify thousands or millions of pieces of content -- content that can be disseminated in many media formats, cropped or edited in unexpected ways, or even recorded off a movie theater screen. Video elements like color, bitrate and even resolution can vary from video to video. With all those variables, can digital fingerprinting really work?

In 2007, Audible Magic's Copysense fingerprinting technology was put to the test in an online video site called Soapbox. Soapbox was a Microsoft project that allowed users to upload videos a la YouTube. Even with Audible Magic's fingerprinting technology at work, tech site Gigaom was easily able to upload a copyrighted video from Comedy Central's "The Daily Show" [source: Gigaom]. It took days for the clip to be taken down from Soapbox -- even after Gigaom contacted Microsoft and Audible Magic for comment. Thinking the clip would then be indexed and protected against illicit sharing, Gigaom tried to upload it again. It worked. They had similar success on Myspace, which also employs Audible Magic's fingerprinting.

Audible Magic protects against 11 million songs, movies and television shows. But with decades of media at our fingertips in digital form, the software obviously can't safeguard against all illegal uploads. Digital fingerprinting also can't stop most peer-to-peer file sharing, which distributes material directly between users. The effectiveness of digital fingerprinting in the future is entirely up in the air. If companies like Audible Magic continue to improve their recognition systems and expand their fingerprint databases, sites with user-generated content will be easier to maintain and the technology that identifies media will be more powerful than ever. Who knows? In 20 years, apps like Shazam may be able to differentiate between two live concert versions of "Free Bird" based on the length of a guitar solo. Now that would be accuracy!