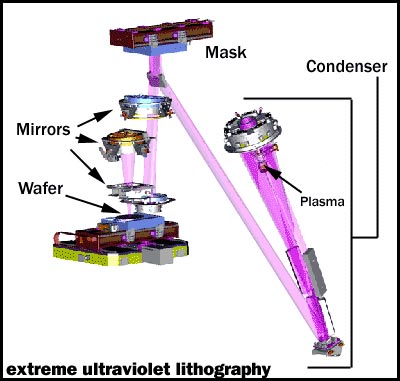 According to Sweeney, the entire process relies on wavelength. If you make the wavelength short, you get a better image. He says to think in terms of taking a still photo with a camera.

"When you take a photograph of something, the quality of the image depends on a lot of things," he said. "And the first thing it depends on is the wavelength of the light that you're using to make the photograph. The shorter the wavelength, the better the image can be. That's just a law of nature."

This entire process has to take place in a vacuum because these wavelengths of light are so short that even air would absorb them. Additionally, EUVL uses concave and convex mirrors coated with multiple layers of molybdenum and silicon -- this coating can reflect nearly 70 percent of EUV light at a wavelength of 13.4 nanometers. The other 30 percent is absorbed by the mirror. Without the coating, the light would be almost totally absorbed before reaching the wafer. The mirror surfaces have to be nearly perfect; even small defects in coatings can destroy the shape of the optics and distort the printed circuit pattern, causing problems in chip function.

For more information on EUVL and related topics, check out the links below.