How DNA Computers Will Work 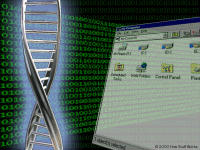 Even as you read this article, computer chip manufacturers are furiously racing to make the next microprocessor that will topple speed records. Sooner or later, though, this competition is bound to hit a wall. Microprocessors made of silicon will eventually reach their limits of speed and miniaturization. Chip makers need a new material to produce faster computing speeds.

You won't believe where scientists have found the new material they need to build the next generation of microprocessors. Millions of natural supercomputers exist inside living organisms, including your body. DNA (deoxyribonucleic acid) molecules, the material our genes are made of, have the potential to perform calculations many times faster than the world's most powerful human-built computers. DNA might one day be integrated into a computer chip to create a so-called biochip that will push computers even faster. DNA molecules have already been harnessed to perform complex mathematical problems.

While still in their infancy, DNA computers will be capable of storing billions of times more data than your personal computer. In this article, you'll learn how scientists are using genetic material to create nano-computers that might take the place of silicon-based computers in the next decade.