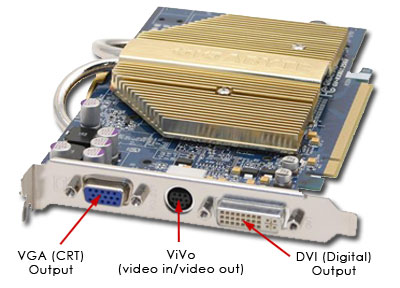 Connections to the motherboard are usually through one of three interfaces:

PCI Express is the newest of the three and provides the fastest transfer rates between the graphics card and the motherboard. PCIe also supports the use of two graphics cards in the same computer.

­Most graphics cards have two monitor connections. Often, one is a DVI connector, which supports LCD screens, and the other is a VGA connector, which supports CRT screens. Some graphics cards have two DVI connectors instead. But that doesn't rule out using a CRT screen; CRT screens can connect to DVI ports through an adapter. At one time, Apple made monitors that used the proprietary Apple Display Connector (ADC). Although these monitors are still in use, new Apple monitors use a DVI connection.

Most people use only one of their two monitor connections. People who need to use two monitors can purchase a graphics card with dual head capability, which splits the display between the two screens. A computer with two dual head, PCIe-enabled video cards could theoretically support four monitors.

Some cards also incorporate TV tuners. Next, we'll look at how to choose a good graphics card.

DirectX and Open GL are application programming interfaces, or APIs. An API helps hardware and software communicate more efficiently by providing instructions for complex tasks, like 3-D rendering. Developers optimize graphics-intensive games for specific APIs. This is why the newest games often require updated versions of DirectX or Open GL to work correctly.

APIs are different from drivers, which are programs that allow hardware to communicate with a computer's operating system. But as with updated APIs, updated device drivers can help programs run correctly.­