What is the Internet of Things? 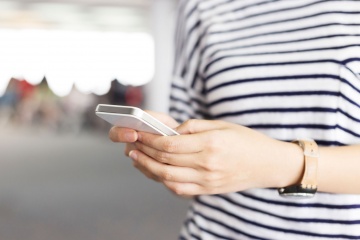 Your smartphone: one of your primary connections to the IoT.
© zhudifeng/iStockphoto

The phrase "Internet of Things" was coined by Kevin Ashton, likely in 1999 as the title of a corporate presentation he made at his place of employment, Proctor & Gamble. During his time there, Ashton came up with the idea of putting a RFID tag on each lipstick and having them communicate with a radio receiver on the shelf to track sales and inventory and signal when restocking was needed. He posits that such data collection can be used to solve lots of problems in the real world [sources: Ashton, Gabbai, Simmonds].

Billions of connected devices are part of the Internet of Things. They use built-in hardware and software to send and receive data via various communication protocols. They might use our smartphones as their gateway to the Internet, connect to some other piece of hardware in our homes that's acting as a hub or connect directly through our home Internet service. They often send data to cloud-computing servers where it's then aggregated and analyzed. We can usually access the results via apps or browsers on our mobile devices or home computers. Some can even be set up to update your status on various social networks.

Despite the fact that most of us do not have smart homes full of interacting gadgets yet, the IoT is already quite huge. The estimates are all over the place, with researchers likely using different criteria for inclusion, but by some accounts, there are already between 15 and 25 billion connected devices, with the count expected to grow to anywhere from 50 to 212 billion by 2020 [sources: FTC, Intel, McLellan, OIC]. Some analysts even estimate that there will be around a trillion connected devices by 2025 [source: Wasik].

As huge as that number is, it seems less implausible when you realize that you can embed or attach sensors and tiny computing equipment to just about anything. Many of us have a smartphone, a device used as an access point for many connected gadgets, that's also an IoT device in its own right. Wearable fitness trackers are fairly common, too. And embedded processing, sensing and communication equipment is being added to nearly any device you can think of, from bathroom scales to refrigerators — even shoes. Smart thermostats, smoke alarms and security cameras can track your habits to help you save on energy bills, let you remotely see camera views of your home, send you a warning when something isn't right and make it easy to contact emergency services. You can even buy small tags to put on and track anything from your car keys to your pets and kids.

Lots more connected devices are either out already or hitting the market soon. Right now, we are likely to have a smattering of smart devices that we can interact with individually (often via separate phone apps), but that for the most part don't work in conjunction with one another. However, companies and industry groups are working to create standards and platforms to make it easier for all these devices to be programmed to work together more seamlessly, as well as to improve security. Outside the home, lots of industries and cities are adopting, or have already adopted, technologies that add to the Internet of Things, too.

Once there are more devices that can work with other devices, even those from different manufactures, we'll be able to automate lots of mundane tasks. We've essentially given common physical objects both computing power and senses. They can take readings from our surrounding environment (even our own bodies) and use the data to change their own settings, signal other devices to do so and aggregate it for us to peruse. A lot of them perform actions based on complex algorithms, not just the simple if-then directions of past embedded computing, that either occur within their own processors or on cloud servers.

There is still lots of innovation going on, so all these smart gadgets are bound to enable things we're not even considering right now.