Economic Impacts of the IoT 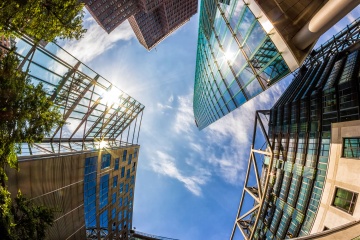 Ideally, the Internet of Things will lead us to develop smart cities designed around both efficiency and sustainability.
© FrancescoRizzato/iStockphotos

There are lots of ways the devices of the Internet of Things may affect the economy. Connected mobile devices have already caused some disruption by allowing small businesses and individuals to easily take payments without expensive registers or credit card processing equipment; rather, all they need is an app on a typical tablet or smartphone, a simple card reader and an Internet connection. Services from companies such Square and Paypal process these payments, taking a small cut of each transaction. The IoT is also poised to disrupt other industries, such as insurance, where the ability to have sensors on just about anything can mean early detection of all kinds of risks and dangers, and could allow them to reward customers for adopting these devices, or penalize them for what they consider risky behavior (like speeding).

The IoT will further automate processes and increase efficiency, which will affect companies' bottom lines. With embedded technology that can communicate conditions immediately, there can be great reductions in waste of perishable goods, materials lost to manufacturing issues, time lost to unexpected machine or system breakdowns, and energy consumption, resulting in cost savings. The increased access to data that can be gathered in real time can also lead to better and more timely business decisions. Companies have been known to monetize data, and now they'll have even more.

These new disruptions, efficiencies and automated systems could potentially reduce jobs, such as the manual labor required to take and stock inventory, monitor manufacturing processes, read utility meters and the like. All industries will be affected as more devices become connected. But although automating tasks has caused job losses in manufacturing in the past, often when automation takes over a mundane task, the skills required for a job just shift to more complex tasks. And sometimes jobs even increase because of product demand. Despite the ubiquity of ATMs, which first came online in the mid-1970s and do a lot of tasks formerly performed by bank tellers, the Bureau of Labor Statics discovered that there was an increase in teller jobs from 1999 to 2009. This is in part because banks opened more branches to reach more customers once lower staffing requirements made each one cheaper to operate [source: Bessen].

The IoT should greatly increase other types of jobs, especially those related to the gadgets themselves and the data they gather. This includes sales and maintenance of the related hardware, development of devices and analytics software, and data analysis (although some are working on programs to do a lot of the analytical heavy lifting). More IT staff and customer service representatives might be needed for monitoring services connected to a lot of these devices. The data centers necessary for cloud computing may also have to expand or increase in number. Cisco estimates that the data created annually by IOT devices will rise from 113.4 zettabytes (ZB) in 2013 to 403 ZB in 2018 [sources: Cisco, McLellan].

Machina Research reported in April 2015 that the value of the Internet of Things was around $900 billion in 2014, and they predicted it will rise to $4.3 trillion by 2024, an amount greater than the economies of many countries. Some other analysts put the potential value at $6.2 trillion by 2025 [source: Intel]. Getting on board with the Internet of Things may take large IT investments from companies and require changes to business processes, new equipment, and lots more Internet bandwidth, storage capability and staff to deal with the new technology. But hopefully the return on investment will be just as great, if not greater.

Costs aside, smart cities, buildings and homes enabled by the Internet of Things can also go a long way toward cutting waste, pollutants and greenhouse emissions, making our modern lives more sustainable over the long run. The devices of the IoT can also provide us with lots of conveniences that save our efforts for more professionally and personally rewarding tasks. Or more nap time. Who's not on board with that?

Author's Note: How the Internet of Things Works

Researching this article has been illuminating in terms of all the things we can do because of the Internet of Things — not in the future, but right now! Being a gadget junkie, I'm already aware of some of them. Just today I started using my fitness tracker to control the music on my phone, which I have beaming to a nearby Bluetooth external speaker. It's not that much easier than picking up my phone, opening my music and flipping through the songs. But it could be a godsend while on the treadmill. That is, when I'm not watching shows thrown from my phone to the Chromecast connected to my little treadmill-facing TV.

There are a number of household items that the tech-savvy or money-laden are already using to automate their lives. You can buy existing ecosystems of devices that work together or buy sensors and tiny computing devices and make some of your own. If there's one thing I could always use, it's more time to write, work or play. All these smart, chatty machines just might help achieve that.