Browse the article What is an IP address? 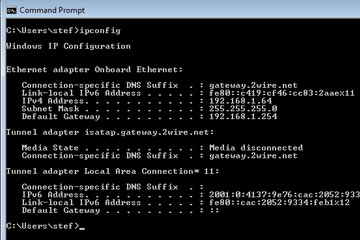 In Microsoft Windows, you can enter ipconfig in the command prompt app to view your computer's current IP address configuration.
Screenshot by Stephanie Crawford for HowStuffWorks

There are two standards for IP addresses: IP Version 4 (IPv4) and IP Version 6 (IPv6). All computers with IP addresses have an IPv4 address, and many are starting to use the new IPv6 address system as well. Here's what these two address types mean:

At the dawn of IPv4 addressing, the Internet was not the large commercial sensation it is today, and most networks were private and closed off from other networks around the world. When the Internet exploded, having only 32 bits to identify a unique Internet address caused people to panic that we'd run out of IP addresses. Under IPv4, there are 232 possible combinations, which offers just under 4.3 billion unique addresses. IPv6 raised that to a panic-relieving 2128 possible addresses. Later, we'll take a closer look at how to understand your computer's IPv4 or IPv6 addresses.

How does your computer get its IP address? An IP address can be either dynamic or static. A static address is one that you configure yourself by editing your computer's network settings. This type of address is rare, and it can create network issues if you use it without a good understanding of TCP/IP. Dynamic addresses are the most common. They're assigned by the Dynamic Host Configuration Protocol (DHCP), a service running on the network. DHCP typically runs on network hardware such as routers or dedicated DHCP servers.

Next, let's take a closer look at the important parts of an IP address and the special roles of certain addresses.

Earlier, you read that IPv4 addresses represent four eight-digit binary numbers. That means that each number could be 00000000 to 11111111 in binary, or 0 to 255 in decimal (base-10). In other words, 0.0.0.0 to 255.255.255.255. However, some numbers in that range are reserved for specific purposes on TCP/IP networks. These reservations are recognized by the authority on TCP/IP addressing, the Internet Assigned Numbers Authority (IANA). Four specific reservations include the following:

The other IP address reservations are for subnet classes. A subnet is a smaller network of computers connected to a larger network through a router. The subnet can have its own address system so computers on the same subnet can communicate quickly without sending data across the larger network. A router on a TCP/IP network, including the Internet, is configured to recognize one or more subnets and route network traffic appropriately. The following are the IP addresses reserved for subnets:

The first three (within Classes A, B and C) are those most used in creating subnets. Later, we'll see how a subnet uses these addresses. The IANA has outlined specific uses for multicast addresses within Internet Engineering Task Force (IETF) document RFC 5771. However, it hasn't designated a purpose or future plan for Class E addresses since it reserved the block in its 1989 document RFC 1112. Before IPv6, the Internet was filled with debate about whether the IANA should release Class E for general use.

Next, let's see how subnets work and find out who has those non-reserved IP addresses out on the Internet.

When you add a computer to a network, that computer uses a four-step process to get an IP address from DHCP:

The following is an example of a subnet IP address you might have on your computer at home if you're using a router (wireless or wired) between your ISP connection and your computer:

Besides reserving IP addresses, the IANA is also responsible for assigning blocks of IP addresses to certain entities, usually commercial or government organizations. Your Internet service provider (ISP) may be one of these entities, or it may be part of a larger block under the control of one of those entities. In order for you to connect to the Internet, your ISP will assign you one of these addresses. You can see a full list of IANA assignments and reservations for IPv4 addresses here.

If you only connect one computer to the Internet, that computer can use the address from your ISP. Many homes today, though, use routers to share a single Internet connection between multiple computers. Wireless routers have become especially popular in recent years, avoiding the need to run network cables between rooms.

If you use a router to share an Internet connection, the router gets the IP address issued directly from the ISP. Then, it creates and manages a subnet for all the computers connected to that router. If your computer's address falls into one of the reserved subnet ranges listed earlier, you're going through a router rather than connecting directly to the Internet.

A subnet mask consists of a series of 1 bits followed by a series of 0 bits. The 1 bits indicate those that should mask the network bits in the IP address, revealing only those that identify a unique node on that network. In the IPv4 standard, the most commonly used subnet masks have complete octets of 1s and 0s as follows:

See the sidebar on the previous page for a look at how all this information comes together to form your IP address. For even more information about IP addresses, the Internet and related networking topics, head on to the next page.