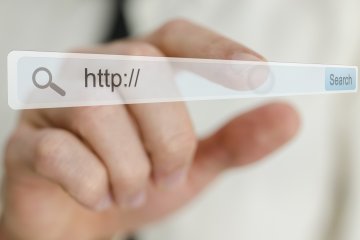 Everyone in the world may not speak English, but if you have access to the internet you probably know your way around the web.
Gajus/Thinkstock

The short answer: Web addresses are in English because the people who developed the standards for web addresses were, for the most part, English-speaking Americans.

The longer answer: In the earliest days of the internet, the only way to connect with a remote computer was to provide its unique IP address, a long string of digits such as 165.254.202.218. But in 1983, as the number of computers on the network continued to grow, the University of Wisconsin developed the Domain Name System (DNS), which maps numeric IP addresses to more easily remembered domain names like howstuffworks.com.

In 1990, British scientist (and English speaker) Tim Berners-Lee invented the World Wide Web, and by 1992, more than one million computers were connected, most of them in the United States [source: Computer History Museum]. In 1994, the Internet Engineering Task Force (IETF), a standards organization made up of representatives from several U.S. government agencies, published a set of standards for web addresses, which it called Uniform Resource Locators, or URLs [sources: Berners-Lee, Internet Society, Ishida].

To make web addresses easy to read, write, type and remember, the IETF restricted URLs to a small number of characters, namely the uppercase and lowercase letters of the English (or Latin) alphabet, the digits 0 through 9 and a few symbols [source: Berners-Lee]. The allowable characters are based on the American Standard Code for Information Interchange, better known as the US-ASCII character set, which was developed in the United States and first published in 1963.

This all worked out fine for English-speaking countries, but as of 2009, more than half of the 1.6 billion internet users worldwide spoke a language with a character set other than the English (or Latin) alphabet [source: Whitney]. To understand what using the web is like for those individuals, imagine that you have to navigate the web using only Arabic. The content on your favorite sites is still in English, but the web address for every site you use is made up of completely unfamiliar characters that may not even be found on your keyboard [source: Ishida]. That scenario, in reverse, is essentially what the Internet experience has been like for web users who read and write using not only another language, but an entirely different alphabet or set of characters. (Visit a website like Egypt's el-balad.com, for example, and the distinction between the site content, which is entirely in Arabic, and the web address, which uses only English characters, becomes immediately clear.)

Given the growing number of non-English users online, it may come as no surprise that English web addresses are no longer the law of the land. In 2009, ICANN, the U.S.-based nonprofit organization that regulates domain names on the internet, approved the use of Internationalized Domain Names (IDNs), meaning that web addresses would be able to contain non-English characters like Chinese, Korean, Arabic or Cyrillic script [sources: Arthur, ICANN].

Why Do Social Media Platforms Practice Shadowbanning?
Peach in the Pits: The Very Quick Rise and Fall of a Social Media App
How Second Life Works