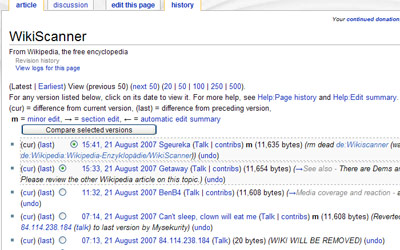 The "history" tab on a Wikipedia entry allows you to see

In creating the WikiScanner, Virgil Griffith took advantage of one of Wikipedia's main features -- its extensive records and backlogs. To see an example of what these records look like, simply click on the "history" tab at the top of a Wikipedia entry. There you can see the names of registered users who edited the article, the IP addresses of anonymous editors and notes on changes. You can also easily compare different versions of an article or leave a message for an editor, even an anonymous one.

Wikipedia makes it possible to download a complete version of the encyclopedia, including every article and the records of all edits performed. Griffith downloaded the complete encyclopedia and extracted all of the anonymous changes and their associated IP addresses. He came up with 34,417,493 anonymous edits made from Feb. 7, 2002 through Aug. 4, 2007 from 2,668,095 different IP addresses [source: Griffith].

A variety of services, some of them publicly available, make it possible to trace IP addresses to the corporations, government entities and organizations that own them. Using software from IP2Location, a company that sells programs that allow users to match IP addresses with their owners, Griffith found that 187,529 organizations had performed anonymous edits of Wikipedia entries [source: Griffith].

That's about all there is to it. It may seem like a simple idea in theory, but no one before Virgil Griffith had taken a comprehensive look at anonymous Wikipedia edits and tried to find all of the users behind them. Now accessible through Griffith's Web site, the WikiScanner allows users to search for specific organizations, a single IP address, a range of IP addresses, or a Wikipedia entry. After its initial launch, Griffith temporarily disabled some of the site's features due to the heavy traffic it was receiving but later returned with enough bandwidth "to handle the web traffic of a small country" [source: Griffith].

Several Web sites, notably "Wired," have established blogs or forums where users can post their favorite WikiScanner results. Griffith's site has a selection of "Editor's Picks" that link to edits made by prominent organizations, divided into categories like government, education, policy, corporate and news. He also provides other intriguing lists, such as the number of anonymous edits from .gov addresses. NASA comes in first with 6,846 edits [source: Griffith]. The Department of Defense Network Information Center, the registered owner of the army.mil domain name, comes in first among .mil addresses with 43,823 edits [source: Griffith].

So what kind of results did the WikiScanner dig up? Read on to find out.