Consequences of the Wikipedia Scanner 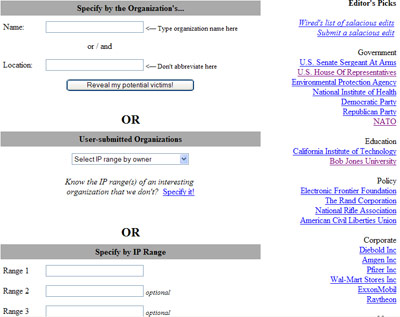 The Wikipedia Scanner offers a variety of ways to search for anonymous edits and links to an editor's list of particularly "salacious" edits.

On his personal Web site, Griffith says that he came up with the idea for the WikiScanner after hearing that Congressmen were whitewashing their own Wikipedia entries by taking out negative statements or replacing negative words with positive ones [source: Griffith]. For example, a "controversial" or "temperamental" politician might instead be called "dynamic."

Among the other reasons for creating the WikiScanner, Griffith said that he wished "to create minor public relations disasters for companies and organizations I dislike" and "to see what 'interesting organizations' (which I am neutral towards) are up to" [source: Griffith]. He also jokes that he wants "to improve virgil.gr's Google pagerank [sic] for the query 'virgil.'"

The announcement of the WikiScanner spawned numerous newspaper articles and spurred amateur detectives around the world to go hunting for nefarious editing. It appears Griffith achieved one of his goals in that many corporations now face questions over the practices of people with access to their networks.

If the WikiScanner traces an edit to a company's IP address, it doesn't mean that an employee performed the edits or that the company sanctioned or ordered the action. The program can't trace edits to a specific person -- only the IP address and the company that owns it. But Griffith noted that if the edit was performed during the workday, then the person who made the changes was likely "either an agent of that company or a guest that was allowed access to their network" [source: Griffith].

Many of the anonymous edits represent violations of Wikipedia's guidelines, especially its conflict of interest (COI) behavioral rule. Editors who have potential COIs are not prevented from editing articles that may raise a conflict of interest, but they are advised to use discretion [source: Wikipedia]. Some organizations are clearly editing articles to their benefit, likely violating Wikipedia rules in the process.

One of Wikipedia's fundamental principles is maintaining a neutral point of view (NPOV), which Wikipedia founder Jimmy Wales calls "absolute and non-negotiable" [source: Wikimedia]. Many of the controversial edits uncovered by the WikiScanner violate the NPOV principle.

Griffith said that he prefers that open platforms like Wikipedia allow users to edit anonymously, but that tools like WikiScanner could be useful in counteracting malicious editing [source: Griffith]. It could be used to help maintain the integrity of controversial pages and to track when a page is vandalized. Or, the tool may result in people being more careful about anonymous edits, performing them from home or public computer systems.

Virgil Griffith says that he has not spoken with the Wikimedia Foundation, the nonprofit organization behind Wikipedia, but that their comments in the press seemed to be positive. A spokesperson for Wikipedia told BBC News that the company "really [values] transparency and the scanner really takes this to another level" [source: BBC News]. The spokesman also said that the WikiScanner may in the future prevent people with conflicts of interest from editing articles [source: BBC News].

In an interview with the "Times Online," Griffith said that his next project might concern the personal information people post on social networking sites [source: Times Online].

For more information about the WikiScanner and to see lists of some of the organizations exposed by the WikiScanner, please check out the links below.