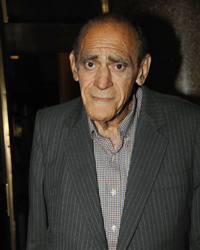 Abe Vigoda is very much alive -- there's even a fake Twitter account to prove it.
Ray Tamarra/Getty Images

If you don't know what Twitter is, then you aren't paying attention. The oddly simple Web-based messaging service has grown to such an extent that you can't go more than a day without hearing the words Twitter or tweet at least a few times. The basis of Twitter is the ability to send out short messages (140-character limit) to lots of people at once. These messages are generally sent via cell phone to whoever is "following" you, but can also be sent from your computer. "Following" means that you've signed up for a free Twitter account and selected another account you want to keep up with.

So how much has Twitter grown? How about more than 1,300 percent year-over-year? In February 2008, Twitter had 475,000 members twittering away at each other. A year later, there were more than 7 million [source: nielson.com]. Once the early adopters were firmly entrenched, celebrities quickly jumped on the Twitter wagon, finding it a good way to stay in touch with fans and message out information instantly without the need for a publicist or traditional media outlet.

But along with the real celebrities have come a slew of imposters to confuse and amuse. Why would someone want to pose as a celebrity? Most likely just for laughs, but some celebs don't have a sense of humor about it. Actor Ewan McGregor's fake Twitter account had nearly 20,000 followers in March 2009. Fans were treated to very believable tweets about McGregor's day-to-day activities like what he ate for breakfast and what film projects he was excited about. Unfortunately, it was all a fake, and the actor had the account shut down.

Phony accounts are possible because Twitter doesn't currently verify the identity of its users. The result of this decision has brought about some very fake and sometimes very funny imposters.