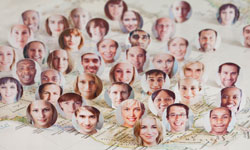 Social networks are the new big thing. Unless you've been hiding under a rock, you've probably heard of Facebook, Twitter, LinkedIn and MySpace. You might even have a profile (or two) set up on a social network (or two). Of course, for every big thing, there's always another big thing hot on its heels. Hot on the heels of social networks? Niche social networks.

A niche is a specialized subset of a larger set, so a niche social network is one that targets a select segment of the general population. Sites like MySpace and Facebook have grown so large that some users feel a bit lost in the shuffle. That's where niche social networks step in. These networks allow users to connect with fewer people who have the same interests, hobbies or professional associations. Because these networks target special groups, they often incorporate community guidelines. For example, guidelines may direct users to use a certain tone or language on the site, or they may forbid certain behavior (like harassment or spamming). Some niche networks are so close-knit that users begin using shorthand and share inside jokes, much like a group of friends would.

It's also worth noting that most social networks make their money through paid advertising, and a niche network is an advertiser's dream because it's a readymade target audience. For example, a social network for pet lovers would provide a logical ad slot for pet food. In 2006, advertisers spent $280 million on social networks. By 2010, that number should rise to $1.9 billion [source: Holahan].

So what are these niche social networks and what kinds of hobbyists do they attract? Let's take a look at five noteworthy online communities.