How Interplanetary Internet Will Work 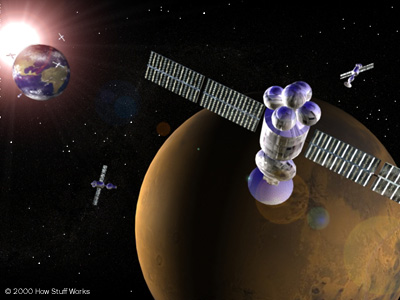 Satellites circling Mars could help send information back to Earth over an interplanetary Internet.

You can talk to almost anyone, in any corner of the world, almost instantly because of the Internet and other advances in electronic communication. Scientists and space explorers now are looking for a way to communicate almost instantly beyond Earth. The next phase of the Internet will take us to far reaches of our solar system, and lay the groundwork for a communications system for a manned missions to Mars and planets beyond.

If we ever want to find out more about other planets, we will need a better communication system for future space missions. Today, communication in space moves at a snail's pace compared to communication on Earth. There are several reasons for this:

There's a good chance that humans will travel to Mars before we see the beginning of a new century. How will we communicate with these distant travelers? Scientists, engineers and programmers are already working to develop an interplanetary Internet that will connect us to probes and human space travelers, and allow more information to be sent back to Earth. If you've ever wanted to travel into space, then this edition of How Stuff Will Work will show you how the interplanetary Internet will enable anyone to travel into space -- the way the Internet allows us to visit foreign lands without leaving our desks -- and what technologies will support such an astronomical communications system. 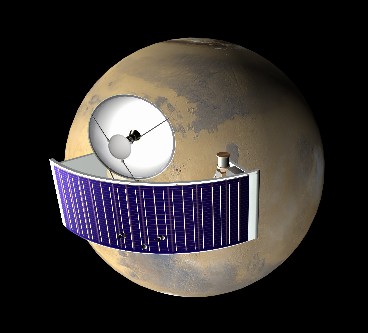 Six microsatellites like this one might be put into low Mars orbit to increase data return from Mars missions.
Photo courtesy NASA / JPL

Take a look at the the 1997 Mars Pathfinder rover mission and you will understand space explorers need an interplanetary Internet for deep space communications. Data from the Pathfinder trickled back at an average rate of about 300 bits per second during its mission. Most likely, your computer can transfer data at least 200 times faster than that. An Internet between Mars and Earth would likely yield a data transfer rate of 11,000 bits per second. That is still much slower than your computer's transfer rate, but it would be enough to send back more detailed images of the Mars surface. Mars Network researchers think that the transfer rate could eventually go to about 1 Megabyte (8,288,608 bits) per second and allow anyone to take a virtual trip to Mars.

The DSN array of antennas would be used to send and receive data over the interplanetary Internet.
Photo courtesy NASA / DSN

The DSN is the international network of antennas used by NASA to track data and control navigation of interplanetary spacecraft. It is designed to allow for continuous radio communication with the spacecraft. However, recent space missions have lost communication with the DSN, including the Mars Climate Orbiter and the Mars Polar Lander missions in 1999. There are three global facilities, in California, Australia and Spain, that make up the DSN. Each facility is equipped with one 111-foot (34-meter) diameter high efficiency antenna, one 111-foot beam waveguide antenna (three in California), one 85-foot (26-meter) antenna, one 230-foot (70-meter) antenna and one 36-foot (11-meter) antenna.

Under the Mars Network plan, the DSN will interact with a constellation of six microsatellites and one large Marsat satellite placed in low Mars orbit. These six microsats are relay satellites for spacecraft on or near the surface of the planet, and they will allow more data to come back from Mars missions. The Marsat will collect data from each of the smaller satellites and beam it to Earth. It will also keep Earth and distant spacecraft connected continuously and allow for high-bandwidth data and video of the planet, according to Mars Network officials. NASA could launch a microsat as early as 2003, with the six-microsat constellation orbiting Mars by 2009. In 2007, the Marsat is scheduled to be placed in a slightly higher orbit than the constellation. All of these dates are still very tentative.

Programmers are developing an Internet file transfer protocol to transmit the messages and overcome delays and interruptions. This protocol will act as the backbone of the entire system much as the Internet protocol (IP) and transmission control protocol (TCP) operate on Earth. IP and TCP, co-developed in the 1970s by Dr. Vinton Cerf, are the messenger service for our Earth-based Internet. These two protocols break up transmitted messages into packets of small data units and route them to a specified destination.

Cerf is part of the team of scientists who are developing a new protocol to enable reliable file transfer over the long distances between planets and spacecraft. This new space protocol must keep the Internet running even if some packets of data are lost during transmission. It must also block out noise picked up while crossing millions of miles. One idea for the space protocol is called the parcel transfer protocol (PTP), which will store and forward data at the gateway of each planet. The protocol would process an information request sent to a gateway and forward it to a final destination. The gateway would then check, process and forward information back down the path it came.

An interplanetary Internet will make data move drastically faster between Earth and the probes and other spacecraft that are millions of miles away. Engineers need to overcome several challenges before we plan our virtual journey to Mars through cyberspace. These challenges are:

On Earth, two computers connected to the Internet are only a few thousand miles away at the most. Because light travels at 186,000 miles per second, it takes only a few fractions of a second to send a packet of data from one computer to another. In contrast, distances between a station on Earth and one on Mars can be between 38 million miles (56 million km) and 248 million miles (400 million km). At these distances, it can take several minutes or hours for a radio signal to reach a receiving station. An interplanetary Internet will not be able to duplicate the real-time immediacy of the Internet that you use. The store-and-forward method will allow information to be sent in bundles and overcome the concern of data being lost due to delays.

The satellites of the Mars Network will be tens or hundreds of millions of miles from Earth and that means that it will be hard to get up there to fix things when they go wrong. The components of these satellites would have to be much more reliable than those circling Earth.

Hackers pose the biggest threat to an interplanetary Internet. Break-ins and corruption of navigation or communication systems could be disastrous for space missions, and even cause deaths in manned-spacecraft missions. Developers are taking every precaution to design a system that will be able to control access. The protocol selected will have to be impenetrable to hackers, something that has not been possible on Earth. Developers may look at the Secure Sockets Layer (SSL) protocol used for financial transactions as a model for securing the interplanetary Internet.

The interplanetary Internet will possibly wire us to Mars within the decade and to other planets in the decades to follow. It will no longer be necessary to go into space to experience space travel. Instead, space will be brought right to your desktop. With enhancements made to boost data rate transfers, you and I might soon be able to take a a virtual space trip to the mountains of Mars, the rings of Saturn or the giant spot on Jupiter.