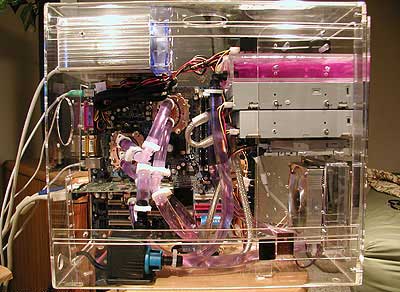 Whether you're using a desktop or laptop computer, there's a good chance that if you stop what you're doing and listen carefully, you'll hear the whirring of a small fan. If your computer has a high-end video card and lots of processing power, you might even hear more than one.

In most computers, fans do a pretty good job of keeping electronic components cool. But for people who want to use high-end hardware or coax their PCs into running faster, a fan might not have enough power for the job. If a computer generates too much heat, liquid cooling, also known as water cooling, can be a better solution. It might seem a little counterintuitive to put liquids near delicate electronic equipment, but cooling with water is far more efficient than cooling with air.

A liquid-cooling system for a PC works a lot like the cooling system of a car. Both take advantage of a basic principle of thermodynamics - that heat moves from warmer objects to cooler objects. As the cooler object gets warmer, the warmer object gets cooler. You can experience this principle firsthand by putting your hand flat on a cool spot on your desk for several seconds. When you lift your hand, your palm will be a little cooler, and the spot where your hand was will be a little warmer.

Liquid cooling is a very common process. A car's cooling system circulates water, usually mixed with antifreeze, through the engine. Hot surfaces in the engine warm the water, cooling themselves off in the process.

Click on "Start" to see the fluid flow through the engine as the engine warms up.

The water circulates from the engine to the radiator, a system of fins and tubes with a lot of exterior surface area. Heat moves from the hot water to the radiator, causing the water to cool off. The cool water then heads back to the engine. At the same time, a fan moves air over the outside of the radiator. The radiator warms the air, cooling itself off at the same time. In this way, the engine's heat moves out of the cooling system and into the surrounding air. Without the radiator's surfaces making contact with the air and dispelling the heat, the system would just move the heat around instead of getting rid of it.

A car engine generates heat as a byproduct of burning fuel. Computer components, on the other hand, generate heat as a byproduct of moving electrons around. A computer's microchips are full of electrical transistors, which are basically electrical switches that are either on or off. As transistors change their states between on and off, electricity moves around in the microchip. The more transistors a chip contains and the faster they change states, the hotter the chip gets. Like a car engine, if the chip gets too hot, it will fail. 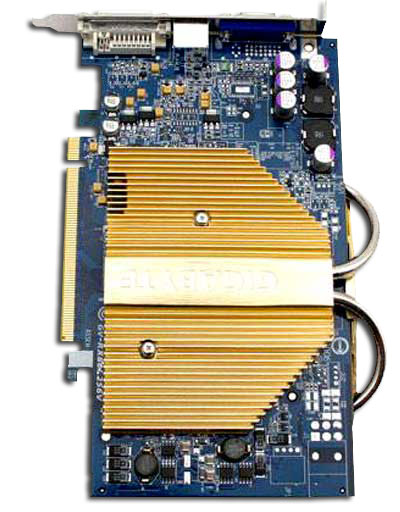 A heat sink (in gold above) uses lots of surface area to transfer heat from electronic components to the air.
Image courtesy HowStuffWorks Shopper

Most computers dispel heat with heat sinks and fans. Heat sinks are basically pieces of metal that provide lots of surface area for the air to touch. The chip warms the heat sink, the heat sink warms the air, and the fan moves the warm air out of the PC case.

This system works most of the time, but sometimes, electronic components produce more heat than simple air circulation can dispel. High-end chips with lots of transistors can overwhelm an air-cooling system. So can chips that have been overclocked, or manually set to work at faster than their default speed.

That's where water cooling comes in. Water has a higher thermal conductivity than air - it can move heat faster than air can. Water also has a higher specific heat capacity. It can absorb more heat before it starts to feel hot.

There are two reasons why a computer might need the increased thermal conductivity and heat capacity of water:

In other words, there are two reasons why you might need to cool a computer with a liquid instead of air:

Next, we'll look at the components of a liquid-cooled system and how they work together. 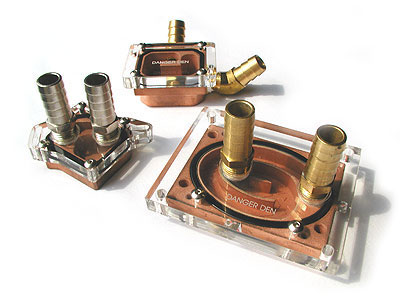 These water blocks can cool a GPU, a CPU and a northbridge.
Image courtesy Darrin Gatewood

Many electronic components do not tolerate direct contact with liquid. So instead of using channels to pump liquid directly through microchips as in a car engine, a liquid-cooled PC uses water blocks. A water block is a piece of heat-conductive metal, like copper or aluminum, that's filled with hollow tubes and channels. The bottom of the water block is a flat piece of metal that sits directly on top of the chip being cooled. Thermal paste between the chip and the block improves the heat transfer between the two surfaces. The chip heats the block, and the water absorbs the heat as it flows through all the channels.

Many central processing unit (CPU) water blocks are universal, but some graphics processing unit (GPU) water blocks only work with specific chips. You can also find water blocks designed to cool other high-temperature chipsets, like the northbridge, which connects your CPU to your memory. Usually, small bolts and washers attach the water block to the necessary printed circuit board (PCB), such as the motherboard or video card.

The rest of a liquid-cooling system's components are much like those found in a car's cooling system. On the next page, learn about the liquid cooling pump. 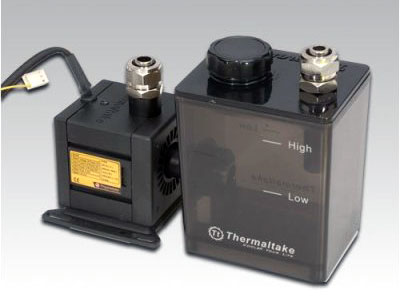 A pump for a liquid-cooled PC.
Image courtesy Amazon.com

The pump is usually a centrifugal pump, much like you'd find in a car's cooling system. Some liquid-cooling pumps are submersible, and you can place them directly inside the coolant reservoir. Others need to be kept dry. If you're thinking about using a submersible pump, make sure its exterior doesn't get hot enough to heat all the fluid in the reservoir.

The pump is one of the most important parts of the system. Its flow rate determines how quickly the coolant moves through the tubes and blocks. If the water moves too quickly, it doesn't have time to absorb heat before moving on. If it moves too slowly, too much heat can build up around sensitive components. The complexity of the system affects the overall flow rate - the more resistance the fluid encounters within the blocks and radiator, the slower the overall flow rate.

The pump also has to be strong enough to move the liquid from the lowest point in the system to the highest. This is known as head pressure or vertical pressure, and it's especially important when liquid cooling tall server towers.

The system's radiator can be designed specifically for liquid-cooling systems, or it can be the heater core from a car. Heater cores dispel lots of heat - they provide the warm air for a car's heating system in the winter. However, they're not usually as attractive as radiators that are designed for use with a liquid-cooling system.  See how everything connects together on the next page. 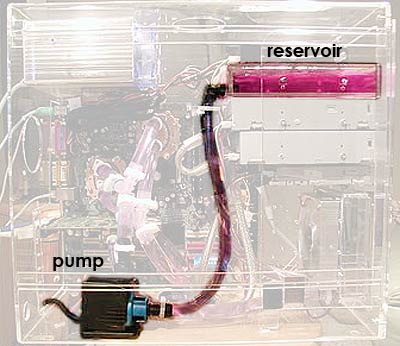 Not every liquid-cooled system has a fan, but most use one to help the radiator dispel heat faster. Similarly, not every system has a separate reservoir. Those that don't generally have a fill/bleed line for adding coolant and removing extra air from the system. Usually, the fill/bleed line leads to a filling port at the top of the computer's case.

In a liquid-cooled PC, the tubing presents a special challenge. It has to be flexible enough to connect components that may be at odd angles to one another. But it can't be prone to kinking - a kinked hose can severely restrict the flow of fluid through the system.

In a simple system, a tube connects the pump to the inlet of a water block. Separate tubes run from the water block's outlet to the radiator and the radiator to the reservoir, which often sits in one of the computer's CD-ROM bays. The final tube connects the reservoir back to the pump. For systems with multiple water blocks, tubes connect one block's outlet to the next block's inlet, connecting the blocks in series like a daisy chain.

Many electrical components can short-circuit when exposed to liquid, but some liquids can both dispel heat and act as electrical insulators. One such liquid is cooking oil. Check out what happens when you submerge a computer in oil at the Toms Hardware site or at Eppenga.com. 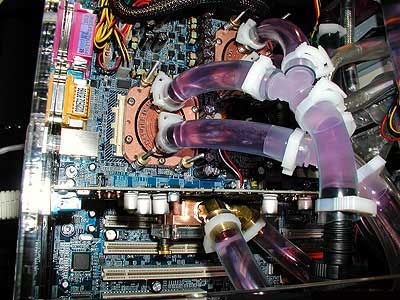 In an operational system, tubes carry coolant to and from water blocks.
Image courtesy Darrin Gatewood

The final component of a liquid-cooling system is the liquid itself. Many people use distilled water, since tap water contains contaminants that can cloud the system or clog the channels in the water blocks and radiator. Specialized additives can add color to the fluid, making it more visually appealing when used in a clear case. They can also lower the freezing point or surface tension of the water, making it a more effective coolant. Finally, some additives have antimicrobial or anti-corrosion ingredients, which can increase the life of the system.

If you decide to install a liquid-cooling system in your computer, it's a good idea to let the pump circulate the fluid for a while so you can check for leaks. Keep your computer turned off during this test period so you'll be less likely to damage your hardware if a leak does occur.

If you like the idea of liquid cooling but don't want to research individual components, you can buy a ready-to-use unit or kit. Self-contained units can plug directly into a computer's expansion slots or power supply and provide liquid cooling to one specific chip. Kits include all the parts you need and instructions for assembling them - just make sure the parts included are compatible with your computer's hardware. Some companies also sell high-end PCs with liquid cooling factory-installed.

Check out the links on the next page to learn more about PCs, thermodynamics, liquid-cooled computers and related topics.

Some people prefer systems that use these devices because they cool a PC's components well below ambient temperature. However, they do require extra precautions. Since the cold side of a Peltier device is colder than the surrounding air, it's prone to accumulating condensation. Without ample protection against condensation, a Peltier system can lead to a short circuit.