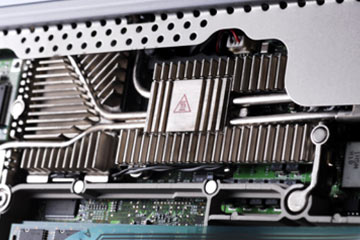 Though the term heat sink probably isn't one most people think of when they hear the word computer, it should be. Without heat sinks, modern computers couldn't run at the speeds they do. Just as you cool down with a cold bottle of Gatorade after a high impact workout, heat sinks cool down your computer's processor after it runs multiple programs at once. And without a quality heat sink, your computer processor is at risk of overheating, which could destroy your entire system, costing you hundreds, even thousands of dollars.

But what exactly is a heat sink and how does it work? Simply put, a heat sink is an object that disperses heat from another object. They're most commonly used in computers, but are also found in cell phones, DVD players and even refrigerators. In computers, a heat sink is an attachment for a chip that prevents the chip from overheating and, in modern computers, it's as important as any other component.

Before the 1990s, heat sinks were usually only necessary in large computers where the heat from the processor was a problem. But with the introduction of faster processors, heat sinks became essential in almost every computer because they tended to overheat without the aid of a cooling mechanism.

On the next page we'll take a look at some different types of heat sinks, as well as the scientific principles that explain how they work.

One of the best and most common materials used to make heat sinks is copper. Copper has a very high thermal conductivity of 400 W/mK. It is, however, heavier than aluminum and more expensive. But for operating systems that require an extensive amount of heat dissipation, copper is frequently used. 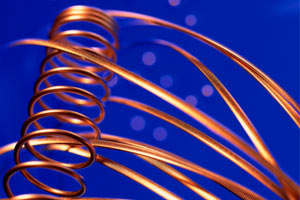 When you buy a computer, whether it's a Dell, Sony or an HP, the heat sink is already installed. However, if you're building your own computer, there are certain factors you must consider when choosing the right heat sink. Since you have so many options when choosing a processor, just be certain that the thermal output of the processor you buy matches the thermal handling capability of the heat sink you buy. To determine the heat sink performance required by the processor you buy, you need to know three things:

When you buy a heat sink, it comes with installation instructions. What they may not tell you is the importance of using a thermal interface material. Thermal interface materials are placed between the processor and the heat sink to allow for the best possible transfer of heat. Usually, this material comes in the form of grease, with a base of copper, aluminum or another highly conductive material. Another type of interface is called phase-change material because it becomes thinner as temperatures rise, enabling the heat to flow into tiny spaces between the processor and the heat sink. These materials are not as conductive as grease, but don't tend to spill as often. Any thermal interface is better than installing the heat sink dry.