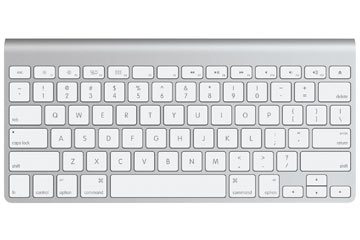 The Mac keyboard has no "print screen" button, but it's still easy to get the screenshots you need.
Image courtesy of Apple, Inc.

You might occasionally need to capture the image on your computer screen so you can save or share it. If you've used a PC designed to run Microsoft Windows, you've probably used the Print Screen key on the keyboard to do this. If you're using a Mac, though, you'll notice Apple doesn't include such a key. Don't worry, though, because we're about to look at the keyboard combinations and built-in tools you can use on your Mac to capture what you need from the screen.

First, let's look at the keyboard combinations you can use to capture the image on your screen. The keystrokes for screenshots are multiple keys that should be pressed together. When you do this, press and hold the first key, then the second, and so forth, and immediately release all keys after pressing the final one in the sequence. The following are the keystrokes to remember for screen capturing:

Command+Shift+3 captures the entire screen and saves it to a file on your desktop.

Command+Shift+4 temporarily replaces your mouse cursor with a tool to select any rectangular portion of the screen. Click and drag the tool to make your selection. Your cursor immediately returns to normal after that selection.

Control added to the start of either of these sequences saves the image to the clipboard temporarily instead of to a permanent file. That allows you to copy and paste what you see on the screen into an application, such as image editing software.

If you don't use the Control key, your Mac saves these keystroke captures to your desktop by default. When you're capturing images this way, you won't see any system or app notifications to verify success. Instead, the system just plays a chime that sounds like a film camera snapping a photo. To see the files you're saving, you'll have to either open your Finder or minimize your windows to find the images saved on the desktop.

Mac OS X traditionally saved keyboard-generated screenshots as tagged image file format (TIFF) files. Macs switched to portable document format (PDF) starting in the 10.2 release of OS X, and to portable network graphics (PNG) files by 10.6. Later, we'll look at how you can convert any of these images to other file formats.

While keystrokes let you get a quick capture from the screen, they have limited options for what you're capturing. That's where the Grab utility comes in. Next, let's take a look at how to use Grab, including how to capture a specific window and how to time the capture to include things like mouse-over text or drop-down menus.

Grab offers more features than keystrokes alone when capturing images from your Mac's computer screen. To open Grab, open your Finder, select "applications" under "places," and expand "utilities." Grab should be one of the utilities listed there. Double-click to open the app from there in the Finder.

When using Grab, you won't see an application window on the screen until you've captured something. Instead, you'll just have the Grab icon in your Dock, showing that the app is running, and the Grab menu across the top when the app is in the forefront. When you're ready to take a screenshot, click the Grab icon to bring it to the forefront.

With Grab active, choose one of the following options under the Capture menu:

Selection — This works similar to the Control+Shift+4 keystroke, in that you're prompted to select a rectangular portion of the screen.

Window — When you select this, Grab prepares a "choose window" button you can use when you have the window ready to capture. Click that button, then immediately click anywhere inside the window you want to capture. Even if the window is partially hidden by other windows, Grab will capture it as if it was the top window. However, any portion of the window that's off-screen probably won't be in the shot.

Screen — This works similar to the Control+Shift+3 keystroke in that it captures the entire screen as you see it.

Timed Screen — This lets you stage something on your screen that only appears when you have your mouse in a certain position, such as a drop-down menu or mouse-over text tips. The timer is about 10 seconds long, and Grab plays a beep with one second remaining.

After you capture a new image, Grab opens that image in a new window rather than saving it to a permanent file. Unlike an image editor, this window, called the Inspector, is only for previewing the image so that you can decide whether or not you want to keep it. Since the Inspector's contents are the same as part of your screen, keep a sharp look out for the edges of the Inspector so your eyes don't mistake them for your main screen.

If you need to redo an image, just close the Inspector with that image in it and click "don't save" when prompted. If you want to keep it, use one of the save options under the "file" menu as you would in other apps. Grab saves files in the TIFF file format only.

You can easily convert a TIFF or other image file to a different file format using the Preview utility in Mac OS X. Preview is the default app for opening images, so you can open Preview just by double-clicking the image you want to convert. With the image open in Preview, select "save as" from the "file" menu, and then use the "format" drop-down menu in the save dialog to choose which format you want to convert to.

We just looked at two options for capturing images on your Mac screen. Both options — keystroke combinations and the Grab utility — are built into Mac OS X. Capture more on taking screenshots on a Mac by checking out the links that follow.