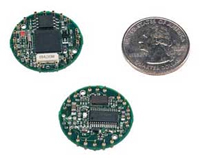 The MICA2DOT mote, typically powered by a circular “button” battery, is not much bigger than a quarter.
Photo courtesy Crossbow Technology, Inc.

The "mote" concept creates a new way of thinking about computers, but the basic idea is pretty simple:

Motes can either run off of batteries, or they can tap into the power grid in certain applications. As motes shrink in size and power consumption, it is possible to imagine solar power or even something exotic like vibration power to keep them running.

All of these parts are packaged together in the smallest container possible. In the future, people imagine shrinking motes to fit into something just a few millimeters on a side. It is more common for motes today, including batteries and antenna, to be the size of a stack of five or six quarters, or the size of a pack of cigarettes. The battery is usually the biggest part of the package right now. Current motes, in bulk, might cost something on the order of $25, but prices are falling.

It is hard to imagine something as small and innocuous as a mote sparking a revolution, but that's exactly what they have done. We'll look at a number of possible applications in the next section.