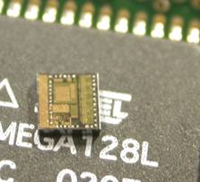 MICA mote is a commercially available product that has been used widely by researchers and developers. It has all of the typical features of a mote and therefore can help you understand what this technology makes possible today. MICA motes are available to the general public through a company called Crossbow. These motes come in two form factors:

The MICA mote uses an Atmel ATmega 128L processor running at 4 megahertz. The 128L is an 8-bit microcontroller that has 128 kilobytes of onboard flash memory to store the mote's program. This CPU is about as powerful as the 8088 CPU found in the original IBM PC (circa 1982). The big difference is that the ATmega consumes only 8 milliamps when it is running, and only 15 microamps in sleep mode.

This low power consumption allows a MICA mote to run for more than a year with two AA batteries. A typical AA battery can produce about 1,000 milliamp-hours. At 8 milliamps, the ATmega would operate for about 120 hours if it operated constantly. However, the programmer will typically write his/her code so that the CPU is asleep much of the time, allowing it to extend battery life considerably. For example, the mote might sleep for 10 seconds, wake up and check status for a few microseconds, and then go back to sleep.

Broad view of "Spec" sitting on top of the previous generation of UC Berkeley Motes, the Mica node. "Spec" is the tiny little square on top of the raised bit in the middle.
Photo courtesy JLH Labs

MICA motes come with 512 kilobytes of flash memory to hold data. They also have a 10-bit A/D converter so that sensor data can be digitized. Separate sensors on a daughter card can connect to the mote. Sensors available include temperature, acceleration, light, sound and magnetic. Advanced sensors for things like GPS signals are under development.

The final component of a MICA mote is the radio. It has a range of several hundred feet and can transmit approximately 40,000 bits per second. When it is off, the radio consumes less than one microamp. When receiving data, it consumes 10 milliamps. When transmitting, it consumes 25 milliamps. Conserving radio power is key to long battery life.

All of these hardware components together create a MICA mote. A programmer writes software to control the mote and make it perform a certain way. Software on MICA motes is built on an operating system called TinyOS. TinyOS is helpful because it deals with the radio and power management systems for you and makes it much easier to write software for the mote.