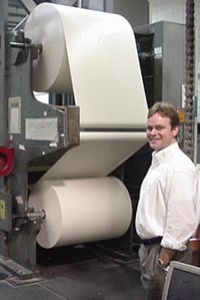 The next time you read your favorite magazine or go through the latest catalog that arrives in your mailbox, stop for a moment and think about how that publication came to be. First, writers, editors and designers participate in the creative process­. Printers take that creative work and turn it into the publications you read every day. Printing is a fascinating process involving huge high-speed machines, 2,000-pound rolls of paper, computers, metal plates, rubber blankets and sharp knives.

Offset lithography, the most commonly used printing process, and detail the three production steps: pre-press, press run and bindery. We'll follow the publication of our new magazine, How Stuff Works Express, from start to finish to explore this process. 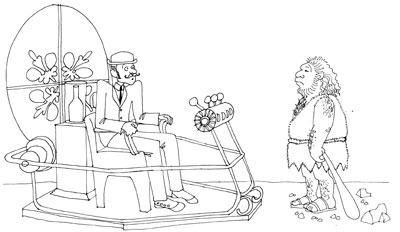 Every print piece starts with the creative process. Writers, editors, graphic designers and artists are the initial step in the creation of magazines, newspapers, brochures, flyers, catalogs and other print pieces.

The How Stuff Works Express creative team begins work months in advance of each edition's publication date. Topics for articles are identified and writers are assigned. Strict guidelines for word length and a reliance on custom graphics keep articles short, informative and entertaining. Editors help focus copy and keep the whole process moving.

Once the text has been developed, graphics are created. Nearly every illustration in How Stuff Works Express is developed as original art exclusively for the magazine. Many "e-meetings" between the author, illustrator and director of design move the work from conceptual drawings to final art.

When each article is written, edited and approved with final art, the pieces are sent electronically to the director of graphic design for page layout. The director determines what page a story will appear on, where art will be in relation to words and, in some publications, where advertising will appear. Often, there are difficult decisions to make about how best to fit the pieces of art and text into very limited space. As in the making of a movie, some materials must be left on the "cutting room floor."

Finally, after the layout of every page has been completed, edited and proofread, a digital "printer's file" is created for the entire document. This is usually done by burning a CD, but can also be done with Zip files or File Transfer Protocol (FTP).

Special thanks to Henry Wurst, Inc., the printer for How Stuff Works Express, for its help in creating this article.

There are nine main types of printing processes:

Offset lithography is the workhorse of printing. Almost every commercial printer does it. But the quality of the final product is often due to the guidance, expertise and equipment provided by the printer.

Offset lithography works on a very simple principle: ink and water don't mix. Images (words and art) are put on plates (see the next section for more on this), which are dampened first by water, then ink. The ink adheres to the image area, the water to the non-image area. Then the image is transferred to a rubber blanket, and from the rubber blanket to paper. That's why the process is called "offset" -- the image does not go directly to the paper from the plates, as it does in gravure printing.

Now, let's look at the steps in the printing process. 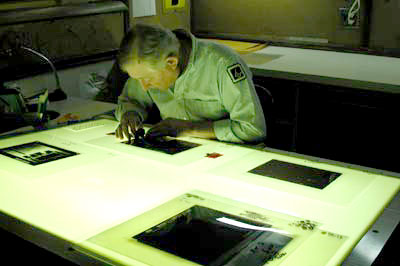 Color negatives are "stripped" together for each page.

Before the job can be printed, the document must be converted to film and "plates." In the case of How Stuff Works Express, film negatives are created from digital files. Images from the negatives are transferred to printing plates in much the same way as photographs are developed. A measured amount of light is allowed to pass through the film negatives to expose the printing plate. When the plates are exposed to light, a chemical reaction occurs that allows an ink-receptive coating to be activated. This results in the transfer of the image from the negative to the plate.

A blue-line print is made from "stripped-up" negatives and is used to check image position before printing.

There are different materials for plates, including paper (which produces a lower-quality product). The best plate material is aluminum, which is more costly.

Each of the primary colors -- black, cyan (blue), magenta (red), and yellow -- has a separate plate. Even though you see many, many colors in the finished product, only these four colors are used (you'll also hear this called the four-color printing process -- it's a little like the three-color process used in television).

We'll talk more about this later as we explore color and registration control. 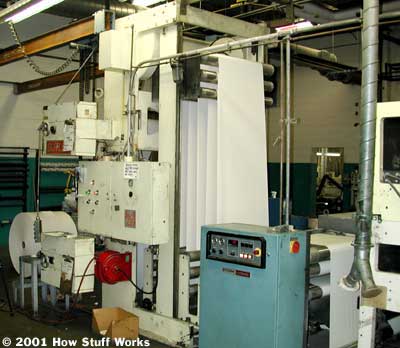 The printing process used to print How Stuff Works Express is called web offset lithography. The paper is fed through the press as one continuous stream pulled from rolls of paper. Each roll can weigh as much as 2,000 pounds (1 ton). The paper is cut to size after printing. Offset lithography can also be done with pre-cut paper in sheetfed presses.

Web presses print at very high speeds and use very large sheets of paper. Press speeds can reach up to 50,000 impressions per hour. An impression is equal to one full press sheet (38 inches x 22 and three-fourths inches), which is 12 pages of How Stuff Works Express.

Even when a 1-ton roll of paper runs out, the presses do not stop rolling. Rolls can be spliced together as the web press is running by using festoons. Festoons are a series of rollers that extend up into a tower. A few moments prior to the splice occurring, the festoons will move up into the tower, pulling in large amounts of paper. At the moment the splice occurs, the rolls of paper stop rotating for a split second, at which point the paper is taped together automatically. As the newly spliced roll begins to pick up speed, the festoons begin to drop out of the tower at a rate predetermined by the speed at which the press is operating. The press operator never has to adjust the press controls during this operation.

The press has to maintain a constant balance between the force required to move the paper forward and the amount of backpressure (resistance) that allows the paper to remain tight and flat while traveling through the equipment.

Ink and water do not mix -- this is the underlying principle of offset lithography. The ink is distributed to the plates through a series of rollers. On the press, the plates are dampened, first by water rollers, then ink rollers. The rollers distribute the ink from the ink fountain onto the plates.

In the next section we'll look at the offset process.­ 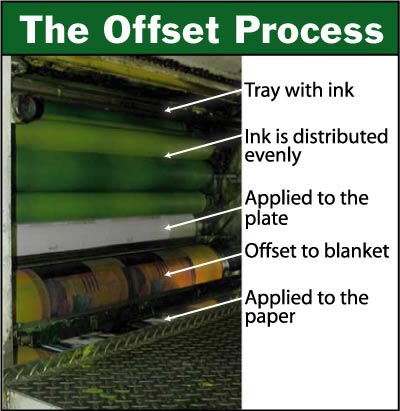 Close-up of rollers. The top series of rollers transfers the yellow ink to the rubber "blanket" cylinder (bottom roller), and then to the paper that is passing horizontally under the "blanket."

The image area of the plate picks up ink from the ink rollers. The water rollers keep the ink off of the non-image areas of the plate. Each plate then transfers its image to a rubber blanket that in turn transfers the image to the paper. The plate itself does not actually touch the paper -- thus the term "offset" lithography. All of this occurs at an extremely high speed.

The paper is left slightly wet by all of the ink and water being applied. Obviously, there is a risk of the ink smudging. The smudging is avoided by having the paper pass through an oven. The oven is gas fired, and the temperature inside runs at 350 to 400 degrees Fahrenheit (176 to 206 degrees Celsius).

The paper is run through a long oven at about 375 degrees Fahrenheit (190 degrees Celsius). This dries (sets) the ink so it won't smudge.

Immediately after leaving the oven, the paper is run through a short series of large metal rollers that have refrigerated water flowing through them. These chill rollers cool the paper down instantly and set the ink into the paper. If this were not done, the ink would rub off on your fingers.

Color and registration control is a process that is aided by the use of computers. Registration is the alignment of the printing plates as they apply their respective color portion of the image that is being printed. If the plates do not line up perfectly, the image will appear out of focus and the color will be wrong. A computer takes a video image of registration marks that have been placed on the press sheet. Each plate has its own individual mark. The computer reads each of these marks and makes adjustments to the position of each plate in order to achieve perfect alignment. All of this occurs many times per second while the press is running at full speed.

The RCS (Register Control System) provides constant adjustment of the press. The computer works in concert with a strobe light and video camera to constantly process information about color registration. Incredibly small adjustments, measured in the 1,000ths of inches, are automatically made to the color rollers to ensure proper registration.

Color control is a process that involves the way in which the ink blends together, and is tied closely to the plate registration. The amount of ink that is released into the units depends on how much ink is needed to achieve a desired look. The ink is adjusted via the control panel that is part of the overall control console. Prior to being placed on the press, the plates are scanned and the data is then transferred to a micro cassette. This serves as the "master" that directs the release of ink to pre-set values.

The web offset press that prints How Stuff Works Express is 115 feet long and weighs 500,000 lbs -- more than 150 Toyota Camrys! The process starts with a huge roll of paper that is fed through four banks of rollers. Each roller adds one color at a time, starting with black, then cyan (blue), magenta (red) and finally yellow.
Press speeds can run up to 50,000 impressions per hour.
Print quality is checked frequently by the press operator. 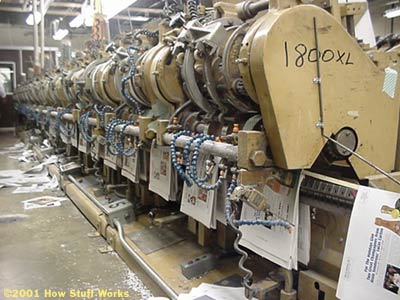 The "stitcher" gathers, assembles and staples the magazines (called books) before they are sent for final trimming. This bank of 14 units can process about 9,000 books per hour!

The bindery is where the printed product is completed. The huge rolls of now-printed paper are cut and put together so that the pages fall in the correct order. Pages are also bound together, by staples or glue, in this step of the process.

In the case of How Stuff Works Express, a machine called a stitcher takes the folded printed paper (called press signatures) and collates them together. Then stitches (staples) are inserted into the signatures, binding them together.

The final components in the stitcher machine are the knives, which trim the paper to the final delivered size. The product is then ready to be shipped to the end destination.