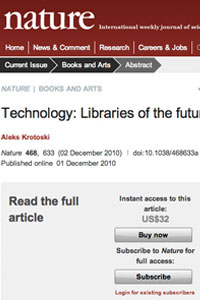 This is what a paywall looks like.
dullhunk/Flickr Creative Commons

Before delving into the great paywall debate, it helps to understand what exactly those virtual gates are. While we might like to envision these subscription portals as being heavily guarded by Internet gnomes that deflect non-paying IP addresses by brandishing tiny swords, paywalls sadly aren't all that magical.

Paywalls are Web site coding systems that allow only authenticated users to pass through into the land of free access. For an idea of how this works, consider how a couple Northwestern students figured out how to hop over The New Yorker magazine's paywall by fiddling with its Web site coding, which, the students noted, is publicly accessible, so it's not like they were breaking in through some sort of backdoor. The paywall consisted of an encryption file and an authentication file that would prompt the user to log in, then verify whether that user has paid access to gawk at those hilarious New Yorker cartoons [source: Shalvey]. Obviously, different paywall systems -- including metered, freemiums (which allow readers some, but not all, articles for free) and full restriction -- will involve different types of encryption, authentication and data tracking that all boil down to coding and more coding.

How much does it cost to build one of these codified walls? In a nutshell: It depends. A paywall system for a smaller daily with lower traffic will undoubtedly cost far less than the $40 to $50 million The New York Times reportedly coughed up for its metered system, which represents only part of the site-wide infrastructure [source: Carlson]. For an idea of just how pricey a paywall that is, consider that it took $25 million to get the almighty Google up and running. Analysts aren't sure why The Times' gilded wall was so exorbitant, and its publisher Arthur Sulzberger claims costs were closer to $25 million, but regardless, it's a lot to pay -- especially considering that some people quickly figured out how to hop right over that golden gate [source: Kramer].

Just like the Northwestern students who found a crack in The New Yorker paywall, folks quickly tinkered with The New York Times JavaScript, CSS and URLs and passed right on through to the site's protected content without having to pay a penny. Internet browser add-ons have even been developed to automatically break the paywall code. If you feel like too much of a content thief to directly dodge the paywall via code, you could take advantage of a way in which The Times intentionally made it porous, leaving side doors open via Google, Facebook and Twitter. Link to a Times article off of any of those sites, and it won't count against the 20-article monthly limit.

These concerted efforts to storm and bring down paywalls may make you wonder whether sites should ask people to pay in the first place. Read on to find out who agrees with you.

The New Yorker on Paywalls

David Remnick, editor of The New Yorker, didn't seem to flinch at the prospect of lower traffic when discussing the magazine's paywall in a 2010 interview with Charlie Rose. Defending the venerable publication's choice to charge for access to its elite reporting and commentary, he told Rose: