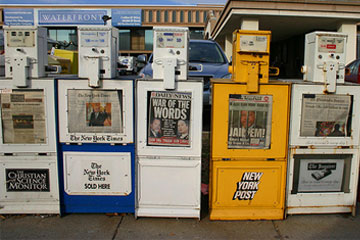 Are the days of paying for news over?
ElvertBarnes/Flickr Creative Commons

People have largely gotten used to accessing Web content -- particularly news content -- gratis. That fundamental fact is a primary reason why so many mainstream sites keep their gates wide open rather than charging an entrance fee. But the work that goes into cooking up that content -- whether it's done by a reporter in the field or a designer creating an infographic or a photographer snapping shots -- doesn't materialize for free. And when the product is high-quality to boot, such as that created by The Wall Street Journal, The Economist, The New York Times and other publications that have erected paywall systems, there's an understandable onus to ask patrons to pony up.

How willing are we, the Internet masses, to bear that financial burden? Surveys say: not very.

A 2010 study from the Pew Research Center's Internet & American Life Project found that 65 percent of Americans have paid for online content [source: Jansen]. Sounds like great news until you break down the data into precisely what we'll spend money on and how much we'll shell out. Out of that majority, only 18 percent have bought access to "digital newspaper, magazine, or journal articles or reports" [source: Jansen]. Instead, Internet users are far more likely to purchase digital music, ringtones, apps and games. Granted, selling apps is sort of like selling one-way tickets to unique content and user experiences, but it doesn't account for standard Web traffic.

Results from an April 2011 survey conducted by Harris Poll didn't hold much more promise for restricted news sites in particular. Only 20 percent of respondents said they'd be willing to pay for online news, down 3 percent from 2009 [source: Bazilian]. This isn't a case of Americans being a bunch of online misers, either. Canadian Media Research Consortium found only 4 percent of adults who'd buy online news, and 92 percent said they'd simply find another free news outlet [source: Phelps].

There also seems to be a price point cut-off for what people consider a reasonable rate for online subscriptions. According to both the Pew and Harris polls data, willing paywall participants begin to drop off beyond $10-per-month. For that reason, some industry analysts suspect that The New York Times' metered paywall system ranging from $15 to $35 per month might be too rich for Internet users' blood [source: Outing]. Sure, some loyal readers will gladly purchase the product, but the paper may be casting a narrow net -- especially when, as we've mentioned, it's possible for people to bypass the paywall altogether.

Anyone irked at single publication paywalls should thank their lucky stars that they aren't online news hounds living in Slovakia. In April 2011, nine Slovakian media groups banded together as Project Piano (named for the organizing company, Piano Media) to erect a massive paywall around their collective publications, which include the nation's largest daily newspaper and broadsheet [source: Bazilian]. Each site will operate on slightly different pay structures and also offer flat-rate weekly ($1.41) and monthly ($4.14) subscription prices. Perhaps they should've called the venture Project Pay Up, instead.