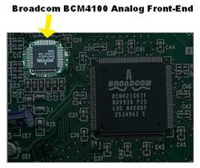 HomePNA uses a method known as frequency-division multiplexing (FDM). FDM puts computer data on separate frequencies from the voice signals being carried by the phone line. FDM separates the extra signal space on a typical phone line into distinct data channels by splitting it into uniform chunks of bandwidth. To better understand FDM, think of radio stations -- each station sends its signal at a different frequency within the available band.

In HomePNA, voice and data travel on the same wires without interfering with each other. In fact, a standard phone line has enough room to support voice, a high-speed DSL modem and a home phone-line network.

Two custom chips designed using the HPNA specifications were developed by Broadcom and make up the core of the HomePNA card's architecture:

The small 4100 chip on the left acts as a transceiver between the larger chip and the signal being received over the phone line from another computer. It can send and receive signals over 1,000 ft (305 m) on a typical phone line. Think of it as an interpreter, translating the analog messages it gets from the phone line into a digital format that the PCI/MSI controller chip can understand. The 4100 does not try to understand what it interprets, it just sends it along.

Since many phone lines in existing homes vary greatly in length and signal quality, the larger 4210 controller chip on the right has to be able to adapt to a variety of challenges. Because the 4210 does this so well, the HPNA estimates that more than 99 percent of U.S. homes have phone wiring that can support HomePNA. Basically, it works this way: First, the controller chip takes the unfiltered content it receives from the smaller chip and strips away all the noise. It then takes what is left and passes it on to the computer for processing. Once the computer processes the information, it returns an acknowledgment to the sending computer so it knows that the data was received. This happens thousands of times each second as the computers communicate.

In the next section, we'll discuss installing HomePNA and some of the problems you might face.