What causes the faint horizontal lines on my monitor? 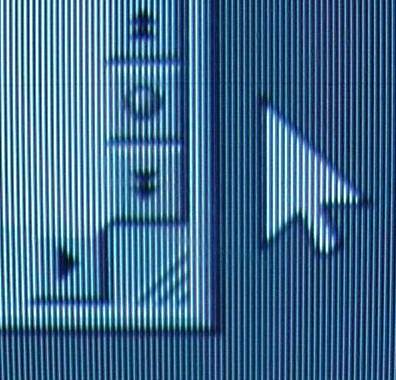 Most likely, you have purchased a Cathode Ray Tube (CRT) monitor based on Sony's Trinitron technology. These monitors use an aperture grill instead of a shadow mask, and the aperture grill causes the lines. You can see the line in the following photo:

To understand why the lines are there, we need to look at the shadow mask and aperture grill systems and understand the differences between them.

Aperture grills have one significant problem and this is what causes the horizontal lines you see. To maintain equal spacing between the vertical wires, the aperture grill has two (one on displays 14 inches or smaller) horizontal damper wires, which hold the vertical wires in place. These wires cast a faint shadow on the phosphor layer that is not normally noticeable, but when you have an image or application with a light background displayed on your monitor, you can see them.

The Trinitron patent recently expired, which is why you see Trinitron technology (and the faint lines) in other manufacturer's monitors now. Several companies have also developed hybrid variations that combine features of the aperture grill and the shadow mask.