Anatomy of a Transistor 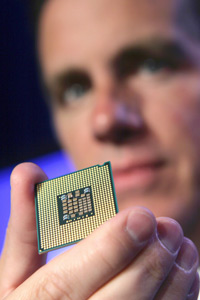 Before we go into the physical limitations of transistors, it helps to know what a transistor is made of and what it actually does. Basically, a transistor is a switch made out of a special kind of matter. One way you can classify matter is by looking at how well it can conduct electricity. That divides matter into three categories: conductors, insulators and semiconductors. A conductor is any type of material made of atoms with free spaces for electrons. An electric current can pass through conductive material -- metals tend to be good conductors. An insulator is matter composed of atoms that don't have any electron spaces available. As a result, electricity can't flow through these materials. Ceramic or glass are good examples of insulators.

Semiconductors are a bit different. They are composed of matter with atoms that have some space for electrons, but not enough to conduct electricity the way metals do. Silicon is such a material. Under some circumstances, silicon can act as a conductor. Under others, it acts as an insulator. By tweaking these circumstances, it's possible to control the flow of electrons. This simple concept is the foundation for the most advanced electronic devices in the world.

­On this foundation are three terminals: a source, a drain and a gate. The gate sits between the source and the drain. It acts as a door through which voltage can pass into the silicon, but not back out. The gate has a thin layer of insulator called an oxide layer that prevents electrons from passing back through the terminal. In our example, the insulator is between the gate and the positively-charged substrate.

The source and drain in our example are negatively-charged terminals. When you apply a positive voltage to the gate, it attracts the few free electrons in the positively-charged substrate to the gate's oxide layer. This creates an electron channel between the source and drain terminals. If you then apply a positive voltage to the drain, electrons will flow from the source through the electron channel to the drain. If you remove the voltage from the gate, the electrons in the substrate are no longer attracted to the gate and the channel is broken. That means when you've got a charge to the gate, the transistor is switched to "on." When the voltage is gone, the transistor is "off."

Electronics interpret this switching as information in the form of bits and bytes. That's how your computer and other electronic devices process data. But because electronics depend on the movement of electrons to process information, they're subject to some special laws of physics. We'll take a closer look into them in the next section.

While we use an n-type transistor in our example, it's possible to build p-type transistors. In that case, you'd dope the substrate with negatively-charged material and the terminals would carry a positive charge.