Why has Germany blocked sales of the Samsung Galaxy Tab? 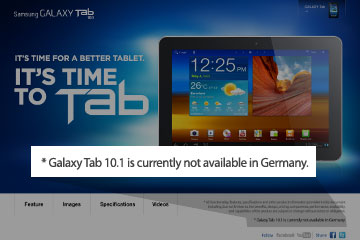 In this article, get the full story on why the Galaxy Tab 10.1 Web page includes this disclaimer.
Screen capture by Stephanie Crawford for HowStuffWorks

It's hard to deny that the features of the Samsung Galaxy Tab are very similar to those of the Apple iPad. Starting with version 10.1, the Galaxy Tab hardware seems to be mimicking the appearance of the iPad. In addition, the Galaxy Tab runs Google's Android 3 mobile operating system, which Android developers redesigned specifically for tablet computing [source: Android.com]. Since the iPad led the way in expanding tablet computing, it's hard to imagine that any tablet on the market today wouldn't want to imitate the features that have made the iPad a success.

However, are the similarities between the Galaxy Tab and the iPad strong enough to require legal action? A German court thought so -- it ruled in favor of Apple in a lawsuit accusing Samsung of infringing on Apple's patents in September 2011. This meant that several new Samsung devices, including the Galaxy Tab 10.1, could not be sold in Germany. So, how did all this come about, and how will this and other lawsuits impact the tablet market?

Apple made the first move in April 2011, when it filed a patent infringement lawsuit against Samsung in the European Union countries. In its claim, Apple listed several Samsung devices which resemble Apple devices, naming the Galaxy Tab and several smartphones like the Galaxy S 4G and the Continuum. Two months later, Apple amended the suit to add even more devices, including the newest models of the Galaxy Tab and Galaxy S [source: Bagh].

This lawsuit joins a slew of intellectual property rights cases Apple has filed in countries where Samsung products are sold. These cases also target Motorola, HTC and other corporations who make and market devices that happen to feature Android. Apple's argument is that certain hardware and software features violate patent and trademark rights associated with its iPad and iPhone. The following are just some of the violations that Apple cites in its case filed April 15, 2011, in California:

Reading through the complaint documents, you might think that Apple has a sound case. There is extensive research behind each claimed violation with side-by-side comparisons of Apple and Samsung products. However, Samsung has some reasonable arguments in its defense. Next, let's hear how things played out in Germany leading up to the ban there.

Now we know what Apple's suit was about, but what makes Germany so important? In early August 2011, a district court in Dusseldorf, Germany, granted a preliminary injunction for Apple, banning the sale of the Samsung Galaxy Tab 10.1 in the European Union. Samsung was completely blindsided by the injunction, arguing it had no knowledge of the filing and no opportunity to offer a defense before the court granted the injunction. Samsung immediately appealed, and the ban was lifted a few days later in all EU countries other than Germany [sources: Cheng, Lowensohn].

On Aug. 25, the Dusseldorf court held a hearing on the case. At the hearing, they decided to leave the injunction in place, pending a ruling scheduled for Sept. 9. The temporary injunction didn't just affect the Galaxy Tab 10.1 release. It also forced Samsung to pull previews of its Galaxy Tab 7.7 from the 2011 IFA consumer electronics conference in Berlin, the largest annual conference of its kind in the world. The conference was held Sept. 2 through Sept. 7 [sources: Skinner, Cheng, Whittaker].

Those representing Samsung argued that Apple's claims limited consumer choices in the tablet market. Henrik Timmann, one of Samsung's lawyers, said that the features Apple is claiming it owns are necessary for producing any high-quality tablet device. "Apple's design rights cannot force us to make technically poor products," Timmann said, invoking a point a Dutch judge made during an unrelated case between Samsung and Apple [source: Matussek].

When the Dusseldorf District Court returned on Sept. 9, 2011, it made the Galaxy Tab 10.1 injunction permanent unless a higher court changes the ruling. The ruling means that Samsung is barred from selling the Galaxy Tab 10.1 in a country with one of Europe's strongest economies. It also means that German retailers can't sell the Galaxy Tab 10.1 anywhere in the EU. With this decision, it seemed that Apple would gain traction in the larger lawsuit and see the injunction extended across the entire EU. As of this writing, though, no other countries have banned sales of Samsung's Galaxy Tab.

So far, we've seen what Apple's claiming and how the German court came to ban sales the Galaxy Tab. Let's close our story with a look at Samsung's ongoing defense against Apple worldwide and how this is could impact the global tablet market.

Electronics market analysts have another concern about the impact of the Apple-Samsung rivalry. Besides producing devices in competition with Apple, Samsung also produces computer components that Apple uses in its electronic devices. There's a possibility that threat of the potential loss in its component business from Apple could pressure Samsung to cave in the mobile device battle. In contrast, there's also the possibility Samsung will defend its devices and that Apple will attempt a transition to other manufacturers' components. HSBC analyst Daniel Kim stated, "The most likely scenario is an out-of-court settlement ... after a long drawn legal dispute."

Following the court rulings in Germany, Samsung isn't just sitting around waiting to see what happens with Apple's lawsuits. The South Korean company is boosting its resources and building its legal defense worldwide. In an interview on Sept. 23, 2011, Senior Vice President Lee Younghee, Samsung's head of global marketing and mobile communications, asserted that the company would be less passive moving forward. "We'll be pursuing our rights for this in a more aggressive way from now on," she said [source: Olsen].

Around the same time as the Lee interview, Verizon joined Samsung in its defense against Apple in California. Verizon filed a motion for leave, a request for permission from the court to file an amicus curiae brief in the case. That means that Verizon can submit information voluntarily which the court can consider as help in deciding the case. In its motion, Verizon states that the injunction against Samsung would "hinder Verizon Wireless in developing and deploying its next generation high-speed LTE network." It went on to state that job growth and emergency access to broadband networks would be hindered as well, making an impact on public policy goals [sources: Mueller, Murphy].

Verzion's motion came as a surprise to many people. Not only is Verizon the largest wireless career in the U.S., but it's also the first carrier other than AT&T to be granted status as a service provider for Apple iPhones and iPads. Industry experts declared that the goal of this move was to turn a series of skirmishes between Apple and Samsung into an all-out war to protect consumer choice in the wireless market [sources: Mueller, Murphy].

It's too early to tell what the long-term effects will be from this war, particularly in the up-and-coming tablet market. So far, Samsung and Apple are fighting it out in nine different countries in more than 20 court cases. With battlefields around the world, there's a good chance that these litigations will produce a wide range of results. Samsung has already launched or announced countersuits on its own patents in some of the same countries. Thus, as of this writing, this conflict has only just begun.

Because so much of the Apple-Samsung conflict centers around similarities in the look and feel of the tablets, we might expect a wider variety of tablet products in the coming years from all manufacturers. Besides that, only time will tell whether the tablet market will continue its growth and if either of these major players can avoid a loss in market share. For lots more on the Galaxy Tab ban in Germany and the Apple versus Samsung court battles, swipe over to the next page.