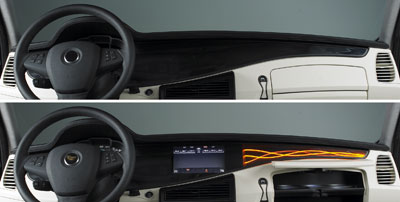 While transmissive film makes lighting more clear when it's switched on (above, lower), it also creates a "dead front" look when it's off (above, top).
Courtesy 3M/Visteon

At the 2008 Consumer Electronics Show (CES) in Las Vegas, Nev. convention-goers ogled concept cars showing off the latest in car stereo technology, onboard gadgetry and comfort. Among them was a jet-black BMW X5 presented by Visteon and 3M.

The black BMW at CES was Visteon and 3M's promotional prototype showing off what the two companies can do when they put their heads together. The BMW contained 50 new technologies, everything from distance sensors in the rear bumper to an eye-catching 3-D dashboard display.

3M is a pioneer in transmissive film, designing impossibly thin sheets of polymer -- down to 62µm in thickness (that's 62 millionths of a meter) -- that can be applied outside or inside an LCD screen to greatly improve brightness, clarity and direction control of the image.

A typical LCD display loses a lot of brightness between the backlight and the image that appears on the screen. 3M estimates that only 8 to 10 percent of the backlight is actually seen by the viewer [source: 3M]. The rest is lost as the light passes through various polarizers, color filters and the liquid crystal of the LCD panel. By using various transmissive films, LCD manufacturers can redirect, recycle and amplify light to increase energy efficiency by as much as 120 percent [source: 3M].

Another issue with LCD screens is security. If you're standing at an automated teller machine, you don't want everyone around you to know how much cash is in your checking account. Or if you're working on your novel at the local Starbucks, you don't want the guy at the next table getting a sneak preview. Transmissive films can help block LCD images from anyone not standing directly in front of the screen. 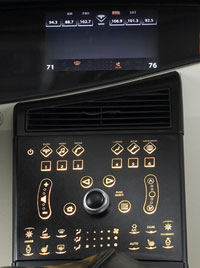 The acronym LCD is short for liquid crystal display. Liquid crystal refers to a special chemical compound that lies at the heart of this innovative technology. But we'll get to that in a second.

First, let's talk about digital images. Every digital image -- LCD displays included -- is composed of millions of individual pixels, the name for smallest visible unit of the image. On a color LCD display, each pixel is broken down into three subpixels. These subpixels are each assigned a color: red, blue or green. The different colors that you see on an LCD display are produced by controlling the intensity of the light available to each red, green and blue subpixel.

This is where it gets interesting. The way LCD displays control how much light is available to each red, green and blue subpixel is through teeny-tiny particles called twisted nematic phase liquid crystals. Twisted nematics get their name because they are twisted in their natural state. But when you apply an electronic charge to a twisted nematic crystal, it untwists.

What researchers figured out is that they could apply different charges to the twisted nematics to get them to untwist only partially. In an LCD display, each red, green and blue subpixel has its own twisted liquid crystal. If the liquid crystal associated with the red pixel is untwisted all the way, but the blue and green crystals remain closed, then the pixel will show a pure red color. Untwist the blue crystal, and the pixel will now be purple. Untwist all three to varying degrees, and you can create every imaginable color in the spectrum.

Most high-end LCD screens are called transmissive because the light source comes from behind the screen. That light is generated by a small fluorescent tube attached to a light guide that directs the light forward toward the LCD panel.

When the light reaches the LCD panel, it must first pass through a polarizer that aligns the light with the rows of twisted liquid crystals. By charging the crystals, light is only allowed to pass through certain subpixels, setting the color of each of the millions of pixels associated with the digital image.

For more details about the technology behind LCD displays, read our article on How LCDs Work.

So where do transmissive films fit in to all of this? Transmissive films can be applied to the backlight area of the LCD system or the LCD display screen itself to greatly increase the clarity, brightness, security and energy efficiency of the system. Read on to find out more about the different types of transmissive films. 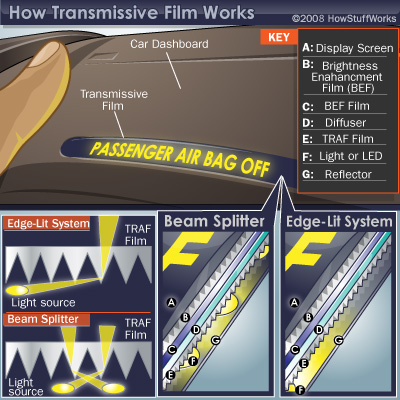 3M designs and manufactures several different types of transmissive films that can be used alone or combined together within the same product to enhance the performance of the LCD display.

Let's talk about brightness first. 3M uses two different kinds of brightness enhancement films for the LCD displays in the BMW concept car. The first is a single sheet of polymer imprinted with a prismatic surface pattern. The pattern looks like the teeth of a gear or a series of triangles pointing out from the flat film surface.

The prisms on the brightness enhancement film redirect light from the backlight toward the viewer. Without these prisms, a lot of the light from the backlight would be wasted -- shining too high or too low for the viewer to see. Think of a non-LCD television set whose light reflects off the ceiling and floor. With brightness enhancement film, all of the light is directed straight out toward the viewer, with any excess light reabsorbed by the back panel of the display.

The second transmissive film used to increase brightness is called dual brightness enhancement film. Its name comes from the fact that the film is not only mounted with prisms, but with an extra reflective sheet for recycling any light that doesn't hit the prism at the correct angle. In this configuration, light continues to bounce around the back of the LCD display until it strikes the brightness enhancement film at the optimal angle to be directed out toward the viewer.

Antireflection transmissive films can be applied to the surface of an LCD display to reduce glare and increase clarity. 3M's antireflective film is actually several layers of film in one. The top layer is an antifingerprint film that makes it easy to wipe fingerprints from PDA or computer screens. The second layer is antiglare film, which reflects light at multiple angles, diffusing the glare effect. A third layer protects PDA screen from scratches. And a fourth layer is a nontacky adhesive that allows the film to be easily removed and replaced in case of scratches or other damage [source: 3M].

For privacy and security issues, 3M has developed light control films that use microlouvers to block screen images from anyone who isn't directly in front of the LCD display. Microlouvers are like microscopic Venetian blinds that point straight out toward the viewer. Anyone to the left or the right of the screen will only see black. 3M sells a special product for laptop and other LCD computer monitors called a Privacy Filter. The privacy filter is essentially a light control film that can be adhered directly to a computer screen.

Another type of transmissive film called enhanced specular reflector film can be applied behind the backlight to maximize the distribution of light from of a single light source. The enhanced specular reflector film is actually made up of hundreds of microscopically thin polymer layers of alternating high and low frequency reflectors. The result is a reflection rate of more than 98 percent, greater than the normal silver mirror you have in your bathroom [source: 3M].

For more information about LEDs, LCDs and related technologies, shift your eyes to the links on the next page.

God bless the good people at 3M. If it were up to me to come up with the next technological innovation, we’d all still be chipping away at animal skins with sharpened flint. But somehow researchers at companies like 3M figure out how to manufacture a sheet of polymer that is 62 millionths of a meter in thickness. Not only that, but the impossibly thin polymer is embedded with strategically designed reflectors and refractors and prisms that actually serve a useful purpose. Next time you marvel at the clarity and brightness of your iPad screen, give a silent shout out to these guys.

Stuff you should know:

Now test your knowledge with these quizzes!

Then read these related articles: