by Patrick J. Kiger
NEXT PAGE
The titan supercomputer can do 27,000 trillion calculations per second. Baranozdemir/Getty Images

For most of us, a computer probably seems fast enough if it's able to run "LEGO Lord of the Rings" or a YouTube video of an English bulldog on a skateboard without slowing to a crawl. But for scientists who need to work on really complicated problems, the mere 158 billion calculations per second that a PC with an i7 processor can perform isn't nearly enough [sources: Peckham, ORNL, Kolawole].

That's why researchers are so excited about the Tennessee-based Oak Ridge National Laboratory (ORNL)'s new toy, the Cray Titan supercomputer. When it was unveiled in October 2012, the Titan claimed the title of world's fastest computer, which had been held by the IBM Sequoia Blue Gene/Q machine at the Lawrence Livermore National Laboratory in California for just six months [sources: Burt, Johnston].

How fast is the Titan? Its theoretical top speed is 27 petaflops, which doesn't sound that impressive unless you know that it means 27,000 trillion calculations per second [source: ORNL]. That's hundreds of thousands times faster than your top-of-the-line PC. Unlike your PC, though, Titan won't fit on a desktop; it occupies a space the size of a basketball court [source: Kolawole].

Titan's incredible speed makes it a fantastic tool for tackling really complicated problems that involve gigantic amounts of data. Researchers plan to use it to run detailed simulations of the Earth's climate, which may yield ideas on how to lessen global warming. They also may use it to help design super-efficient internal combustion engines and solar panels, and to run biological simulations that will help speed the testing of new drugs. On the pure science level, Titan could help scientists simulate the breaking of the bonds that hold molecules together, giving them new insights into one of the most important processes in nature [sources: ORNL, Kolawole].

But the Titan is important not just because it's incredibly fast, but because it pioneers a new sort of supercomputer design that could spawn a generation of even speedier machines. For years, scientists have achieved higher and higher speeds simply by building machines with thousands and thousands of central processing units, or CPUs, in them, and then breaking the calculations they want to perform into smaller pieces that could be parceled out to all of those CPUs [source: ORNL]. The drawback of that approach is all those CPU chips require enormous amounts of electricity. The Titan, however, pairs each of its 18,688 CPUs with a graphic processing unit, or GPU — the sort of chip used in hot-rod gaming PCs — to accelerate the computations. GPUs don't draw as much juice as CPUs, so the result is a machine that's faster than its predecessors but also a lot more energy efficient [sources: ORNL, Kolawole].

Researchers see the Titan as blazing the way toward exascale-class computers — that is, machines a thousand or more times as fast as the most powerful supercomputers today [sources: Kolawole, Goodwin and Zacharia].

Author's Note: What is the world's fastest supercomputer used for?

I grew up in the 1960s, back when a computer was something that took up an entire room, and data was stored on punch cards that carried the printed warning "do not fold, spindle or mutilate." And you really couldn't do that much with them, either. So it's been nothing short of amazing to watch the advance of computing power and capabilities during my lifetime.

The first desktop PC that I bought in 1988 was about 10 times as fast as the onboard computer that the Apollo 11 astronauts used on the way to the Moon in 1969. And today, the iPhone that I carry in my pocket is vastly more powerful than either of them. 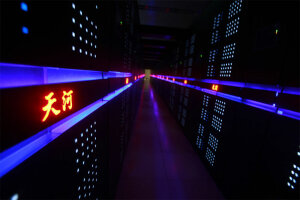 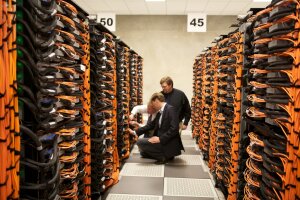 What are supercomputers currently used for?