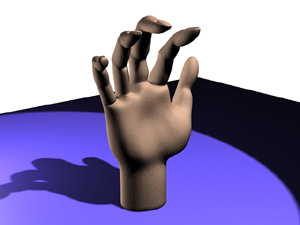 Lighting in an image not only adds depth to the object through shading, it “anchors” objects to the ground with shadows.

When you walk into a room, you turn on a light. You probably don't spend a lot of time thinking about the way the light comes from the bulb or tube and spreads around the room. But the people making 3-D graphics have to think about it, because all the surfaces surrounding the wireframes have to be lit from somewhere. One technique, called ray-tracing, plots the path that imaginary light rays take as they leave the bulb, bounce off of mirrors, walls and other reflecting surfaces, and finally land on items at different intensities from varying angles. It's complicated enough when you think about the rays from a single light bulb, but most rooms have multiple light sources -- several lamps, ceiling fixtures, windows, candles and so on.

Lighting plays a key role in two effects that give the appearance of weight and solidity to objects: shading and shadows. The first, shading, takes place when the light shining on an object is stronger on one side than on the other. This shading is what makes a ball look round, high cheekbones seem striking and the folds in a blanket appear deep and soft. These differences in light intensity work with shape to reinforce the illusion that an object has depth as well as height and width. The illusion of weight comes from the second effect -- shadows.

Solid bodies cast shadows when a light shines on them. You can see this when you observe the shadow that a sundial or a tree casts onto a sidewalk. And because we’re used to seeing real objects and people cast shadows, seeing the shadows in a 3-D image reinforces the illusion that we’re looking through a window into the real world, rather than at a screen of mathematically generated shapes.

Perspective is one of those words that sounds technical but that actually describes a simple effect everyone has seen. If you stand on the side of a long, straight road and look into the distance, it appears as if the two sides of the road come together in a point at the horizon. Also, if trees are standing next to the road, the trees farther away will look smaller than the trees close to you. As a matter of fact, the trees will look like they are converging on the point formed by the side of the road. When all of the objects in a scene look like they will eventually converge at a single point in the distance, that's perspective. There are variations, but most 3-D graphics use the "single point perspective" just described.

In the illustration, the hands are separate, but most scenes feature some items in front of, and partially blocking the view of, other items. For these scenes the software not only must calculate the relative sizes of the items but also must know which item is in front and how much of the other items it hides. The most common technique for calculating these factors is the Z-Buffer. The Z-buffer gets its name from the common label for the axis, or imaginary line, going from the screen back through the scene to the horizon. (There are two other common axes to consider: the x-axis, which measures the scene from side to side, and the y-axis, which measures the scene from top to bottom.)

In the real world, our eyes can’t see objects behind others, so we don’t have the problem of figuring out what we should be seeing. But the computer faces this problem constantly and solves it in a straightforward way. As each object is created, its Z-value is compared to that of other objects that occupy the same x- and y-values. The object with the lowest z-value is fully rendered, while objects with higher z-values aren’t rendered where they intersect. The result ensures that we don’t see background items appearing through the middle of characters in the foreground. Since the z-buffer is employed before objects are fully rendered, pieces of the scene that are hidden behind characters or objects don’t have to be rendered at all. This speeds up graphics performance. Next, we'll look at the depth of field element.