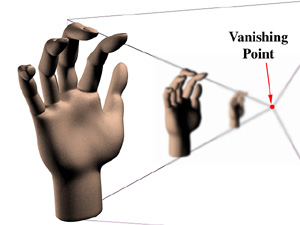 Another optical effect successfully used to create 3-D is depth of field. Using our example of the trees beside the road, as that line of trees gets smaller, another interesting thing happens. If you look at the trees close to you, the trees farther away will appear to be out of focus. And this is especially true when you're looking at a photograph or movie of the trees. Film directors and computer animators use this depth of field effect for two purposes. The first is to reinforce the illusion of depth in the scene you're watching. It's certainly possible for the computer to make sure that every item in a scene, no matter how near or far it's supposed to be, is perfectly in focus. Since we're used to seeing the depth of field effect, though, having items in focus regardless of distance would seem foreign and would disturb the illusion of watching a scene in the real world.

The second reason directors use depth of field is to focus your attention on the items or actors they feel are most important. To direct your attention to the heroine of a movie, for example, a director might use a "shallow depth of field," where only the actor is in focus. A scene that's designed to impress you with the grandeur of nature, on the other hand, might use a "deep depth of field" to get as much as possible in focus and noticeable.

A technique that also relies on fooling the eye is anti-aliasing. Digital graphics systems are very good at creating lines that go straight up and down the screen, or straight across. But when curves or diagonal lines show up (and they show up pretty often in the real world), the computer might produce lines that resemble stair steps instead of smooth flows. So to fool your eye into seeing a smooth curve or line, the computer can add graduated shades of the color in the line to the pixels surrounding the line. These "grayed-out" pixels will fool your eye into thinking that the jagged stair steps are gone. This process of adding additional colored pixels to fool the eye is called anti-aliasing, and it is one of the techniques that separates computer-generated 3-D graphics from those generated by hand. Keeping up with the lines as they move through fields of color, and adding the right amount of "anti-jaggy" color, is yet another complex task that a computer must handle as it creates 3-D animation on your computer monitor.

The jagged “stair steps” that occur when images are painted from pixels in straight lines mark an object as obviously computer-generated.
Drawing gray pixels around the lines of an image -- “blurring” the lines -- minimizes the stair steps and makes an object appear more realistic.

We'll find out how to animate 3-D images in the coming sections.