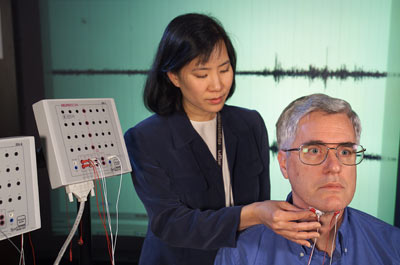 Complete tetraplegia: In many ways, it is the worst possible medical diagnosis, short of imminent death. Total physical paralysis from the neck down can result from spinal cord injuries or diseases such as Amyotrophic Lateral Sclerosis (also known as Lou Gehrig's disease). Sufferers become totally dependent upon others, but they often feel isolated because they have lost the ability to talk. Most of us take for granted the ability to walk from one room to another, but for the severely disabled, even this common action requires assistance from someone else.

Imagine, then, that a completely paralyzed person could control a motorized wheelchair simply by thinking about it. By bypassing damaged nerves, such a device could open many doors to independence for disabled people. In this article, we'll examine a company that is working to make that "what if" into reality. We'll also find out how the same technology could restore speech to people unable to talk.

Whenever you perform a physical action, neurons in your brain generate minute electric signals. These signals move from the brain and travel along axons and dendrites, passing through your nervous system. When they reach the right area of the body, motor neurons activate the necessary muscles to complete the action.

Almost every signal passes through the bundle of nerves inside the spinal cord before moving on to other parts of the body. When the spinal cord is severely damaged or cut, the break in the nervous system prevents the signals from getting where they need to be. In the case of neuromuscular disease, the motor neurons stop functioning -- the signals are still being sent, but there's no way for the body to translate them into actual muscle action.

How can we solve the problem of a faulty nervous system? One way is to intercept signals from the brain before they are interrupted by a break in the spinal cord or degenerated neurons. This is the solution that the thought-controlled wheelchair will put to use.

Physicist Stephen Hawking suffers from Amyotrophic Lateral Sclerosis. Hawking has near complete paralysis but retains enough muscle­ control to allow him to press a button with his right hand. A computer screen displays a series of icons that allow control of his wheelchair, doors and appliances in his house. He can select items on the screen by pressing the button when a moving cursor passes over the correct area of the screen. ­

­­­Hawking speaks in a similar manner. The screen displays the alphabet, with a cursor moving over it. He presses the button at the appropriate letter. Once he has constructed a complete sentence, he can send the text to the voice synthesizer built into his chair [source: Professor Stephen Hawking]. Hawking’s ability to move a finger on his right hand differentiates him from many other victims of paralysis or disease, who are unable to communicate or interact with control systems at all. ­ 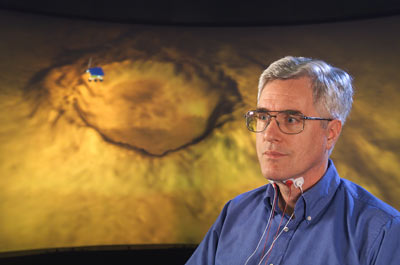 To learn more about thought-controlled wheelchairs and subvocal speech, check out the links on the next page.