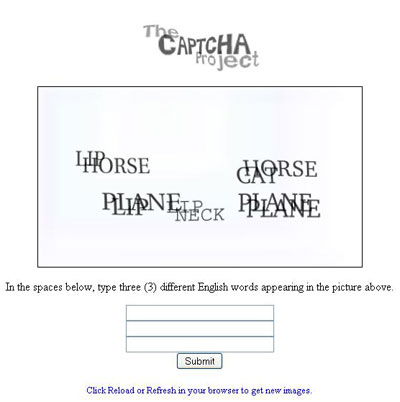 The Gimpy CAPTCHA displays 10 words, but you only have to type three in correctly to pass the test.
©2008 HowStuffWorks

The challenge in breaking a CAPTCHA isn't figuring out what a message says -- after all, humans should have at least an 80 percent success rate. The really hard task is teaching a computer how to process information in a way similar to how humans think. In many cases, people who break CAPTCHAs concentrate not on making computers smarter, but reducing the complexity of the problem posed by the CAPTCHA.

Let's assume you've protected an online form using a CAPTCHA that displays English words. The application warps the font slightly, stretching and bending the letters in unpredictable ways. In addition, the CAPTCHA includes a randomly generated background behind the word.

A programmer wishing to break this CAPTCHA could approach the problem in phases. He or she would need to write an algorithm -- a set of instructions that directs a machine to follow a certain series of steps. In this scenario, one step might be to convert the image in grayscale. That means the application removes all the color from the image, taking away one of the levels of obfuscation the CAPTCHA employs.

Next, the algorithm might tell the computer to detect patterns in the black and white image. The program compares each pattern to a normal letter, looking for matches. If the program can only match a few of the letters, it might cross reference those letters with a database of English words. Then it would plug in likely candidates into the submit field. This approach can be surprisingly effective. It might not work 100 percent of the time, but it can work often enough to be worthwhile to spammers.

What about more complex CAPTCHAs? The Gimpy CAPTCHA displays 10 English words with warped fonts across an irregular background. The CAPTCHA arranges the words in pairs and the words of each pair overlap one another. Users have to type in three correct words in order to move forward. How reliable is this approach?

As it turns out, with the right CAPTCHA-cracking algorithm, it's not terribly reliable. Greg Mori and Jitendra Malik published a paper detailing their approach to cracking the Gimpy version of CAPTCHA. One thing that helped them was that the Gimpy approach uses actual words rather than random strings of letters and numbers. With this in mind, Mori and Malik designed an algorithm that tried to identify words by examining the beginning and end of the string of letters. They also used the Gimpy's 500-word dictionary.

Mori and Malik ran a series of tests using their algorithm. They found that their algorithm could correctly identify the words in a Gimpy CAPTCHA 33 percent of the time [source: Mori and Malik]. While that's far from perfect, it's also significant. Spammers can afford to have only one-third of their attempts succeed if they set bots to break CAPTCHAs several hundred times every minute.

You'd think that the inventors of CAPTCHA would be upset that their hard work is being picked apart by hackers, but you'd be wrong. Find out why in the next section.

Audio CAPTCHAs aren't foolproof either. In the spring of 2008, there were reports that hackers figured out a way to beat Google's audio CAPTCHA system. To crack an audio CAPTCHA, you have to create a library of sounds representing each character in the CAPTCHA's database. Keep in mind that depending on the distortion, there might be several sounds for the same character. After categorizing each sound, the spammer uses a variation of voice-recognition software to interpret the audio CAPTCHA [source: Networkworld].