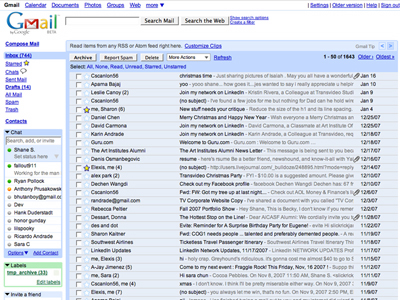 Since its early beginnings which date all the way back to 2004, Gmail has offered users innovative features such as a gigabyte of free storage, built-in search functions and message groupings.

These features have ensured Gmail's place as a top-rated e-mail provider. In October 2007, Gmail was estimated to be the third largest free e-mail service with 87 million users worldwide, based on data from comScore Media Metrix. Yahoo Mail led the way with approximately 262 million users followed by about 256 million users for second-place MSN Hotmail (now Windows Live e-mail) [source: TechNewsWorld].

While AOL and Yahoo have offered Web-based mail since the 1990s, Gmail started as an internal e-mail service at Google Inc. Originally the service was offered by invitation to Google members in April 2004. In February 2007, Google offered Gmail to everyone [source: Google history].

Since then, Google has expanded the e-mail service's features to include group chat with AIM (AOL Instant Messenger) users, Gmail for mobile devices, access to e-mail from other services like AOL or Yahoo Mail, virus scanning, spam control, shortcuts and more. Gmail also provides messaging in 40 languages and allows attachments up to 20 megabytes in size [source: Google history].

In this HowStuffWorks article, we'll take a closer look at these and other Gmail features. First, let's see how easy it is to set up an account and go through Gmail sign in.