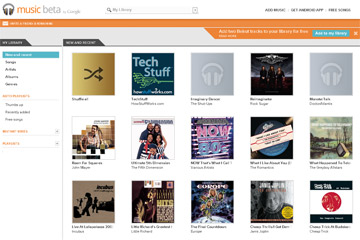 Google Music is a cloud storage service with a streaming music interface.
Screenshot by HowStuffWorks.com

Back in the day -- and we're talking way back -- to listen to music you had very few choices. It really just boiled down to two: Find someone who could sing or play music or learn to do so yourself. Skip ahead a few centuries to the invention of the radio. With car radios and portable transistor radios, you had access to music on the go without having to hire your own personal musician. But your choices weren't unlimited -- you had to listen to whatever the radio station was playing.

A few decades later, magnetic storage was the way to go. You could get a cassette tape and listen to music on a portable player. But storage space per cassette was limited and the magnetic storage would degrade over time. Optical storage solved some problems, but you still had limits to the amount of music you could cram onto a single compact disc, and carrying around a portable player wasn't always easy. And if your CD player moved around too much, the laser inside it could skip bits of the music tracks.

The next big jump came when MP3 players entered into the mix. Now you could create a digital library of music and sync it to a portable device that could potentially hold hundreds of hours of songs. Players with large hard drive space could hold so much music that the battery would run out before you could listen to them all. But even this space had limitations, and porting music from one device to another wasn't always easy.

Now, we have cloud music services that promise to give us unprecedented access to music. Many of them have interfaces that allow you to access music across a wide variety of devices, including computers, MP3 players, smartphones, set-top boxes and video game consoles. You can create an enormous music library and enjoy it in more places than ever before. These are cloud services -- they utilize computer servers connected to the Internet to let you access information.

But what makes music cloud services tick and what are the limitations?

There are two major types of music cloud services. The first is similar to a radio station. You create a profile with the service and build up a music library based on your preferences. The service then streams music over the Internet to you. If you have a slow or unreliable connection to the Internet you may not be able to use these services all the time. Some, like Pandora Radio, allow you to create stations based on a specific artist or song. You aren't guaranteed to hear that artist or song every time you use the service. Instead, you'll hear music that Pandora Radio matches against your preferences. As you listen, you approve or turn down songs that play on your stations and Pandora Radio adjusts the playlist to suit your tastes. With this model of music cloud service, you'll still encounter new music. There are many services that work like Pandora Radio, using various algorithms to match your preferences to music the services have licensed from music studios.

Another approach to the radio station model gives you a little more control over what's in your library. Services like Spotify allow you to search for specific songs and add them to playlists. Whenever you connect to your account, you can listen to your playlists, change the play order of songs and add or delete music from your library. You might not discover as much new music this way, but you'll be able to control your listening experience. Because this model also depends on music licenses, your choices won't be unlimited. If a studio hasn't licensed particular music to the service, you won't find it in the database.

The other major type of cloud service gives you the most freedom but may also require a lot of work. These services store your music remotely. You may have to upload your own music to the service, which can take a lot of time if you have a large library or a slow Internet connection. The service acts like an external hard drive. You can access the music through a special interface -- services like Amazon Cloud Player and Google Music have computer and smartphone apps that do the trick.

Amazon and Apple both have services that give you a few more options when you want to add music to your library. They allow you to buy music through their respective stores and they automatically add your purchases to your online library -- you don't have to upload the music yourself. Both services also give you incentives to buy through their respective stores by padding out your storage space if you buy directly through them.

With the cloud storage music services, there's usually a limit to the number of songs you can save to your account. With Google Music, that limit is 20,000 songs. Amazon Cloud Drive gives you 5 gigabytes of storage for free (enough space for around 1,000 songs) but you can opt to buy more storage space. According to Amazon, upgrading to 20 gigabytes of data storage allows you to store an unlimited number of songs in the cloud. Apple's iCloud doesn't count any purchases through iTunes against your 5 gigabytes of free storage space, so if you only purchase music through Apple you'll never run up against the limit. Likewise, Amazon doesn't count MP3 downloads toward Cloud Drive storage space.

Most variations of this second type of music cloud have their own apps or Web sites that allow you to stream music to your device over the Internet. Alternatively, you may be able to download the actual file to a physical device. That way, you can listen to your music on a device like an MP3 player even if you're going to be in an area with limited Internet connectivity.

Every cloud service has two major components: a front end and a back end. The front end is what the user sees when accessing music. It's Amazon's Cloud Player or Google's Music app. Apps rely on a robust programming language such as Java to give them the functionality to interpret a user's commands and return the right result. Or the front end is the Web page, app or desktop program for Pandora Radio, Last.fm or Spotify. Many of these rely on JavaScript. That's a scripting language that lets developers build interactive, rich Web page experiences. JavaScript is necessary because hypertext markup language (HTML) isn't equipped to deliver robust experiences on its own. The front end could even be a fully fledged computer application such as Apple's iTunes or the Spotify desktop program. In any case, the front end is what we as users see and interact with when we want to listen to music.

Behind the scenes is the back end of the operation. Here's where the heavy lifting happens and where the cloud exists. While no two cloud music services are identical, they share some similarities. Each one uses hundreds or thousands of servers. Some servers execute commands -- matching user requests to the right file is an example. Other servers act as storage. Depending on the nature of the service, there may be multiple servers with space set aside for each user. Services like Google Music store your files on several machines to provide redundancy. That way, should one machine fail your data will remain safe on the other machines. A master server keeps track of where everything is and acts as a general traffic director.

The first step to using any music cloud service is deciding what features are most important to you. Do you want a place to store your existing music library so that you can access it from any Internet-connected device? Do you want to listen to music streaming on the go or do you prefer to store files to an MP3 player? Do you want to have absolute control over your playlists or do you prefer to use a service that allows you to discover new music?

You don't have to settle on just one answer. Many cloud music services have a free version. These services tend to have less storage space than paid tiers of service or they might insert ads between every few songs. If neither of those features bothers you, feel free to try out as many services as you can access. You might find you like one over all the others in the process.

Once you've decided on which service or services you're going to use, it's time to make a profile. Nearly every service requires you to create a profile with a login handle and password. You may also have to register an e-mail address. The service needs to be able to differentiate you from the thousands or millions of other users so that you get the right music every time you log in.

If you're accessing a Web-based service, you'll just need to navigate to the proper Web site. That's how Pandora Radio works. If you want to use a service with a desktop client like Google Music or Amazon Cloud Player, you'll need to download and install the program to all the computers you plan to use when you listen to music. For smartphones, you'll need to find, download and install the appropriate app to give you mobile access to the service.

If you're sticking to music clouds that stream music to you from their databases, you're good to go. But if you want to save your own files to the service -- like with Amazon Cloud Drive or Google Music -- you may need to follow another step. That step is uploading your music to the service. Amazon and Google have simple user interfaces that allow you to add music automatically or manually to your account. Keep in mind that uploading thousands of files can take many hours -- possibly even weeks if you have a lot of songs or a slow connection.

Apple took a different approach with iCloud. By linking iCloud with your iTunes library, you prompt Apple to add any songs purchased through iTunes to your iCloud account. But what if you bought songs through other vendors or ripped music from your CD collection? Then you can use iCloud to match the titles in your library with songs in the iTunes database. Assuming there's a match, you can have those songs added to your iCloud account. This option isn't available in the free version of iCloud -- you have to upgrade to the $24.99 per year plan. With iCloud, you can either stream music to your iOS device or download the track from iCloud directly to the device itself. That way you can listen to songs without interruptions even if you move into an area that has poor cell phone reception or no WiFi network.

With so many choices available, it's hard to say which approach is best. You might love one approach and hate another while your best friend has the opposite reaction. In the end, the best news is that with all these different methods to spreading music in the cloud, it's almost a guarantee that there's something for everyone out there.

Music cloud services like Spotify reserve certain features for paid accounts. For example, if you want to stream music from your Spotify library to a mobile device, you'll need a paid account. You can still use the free Spotify app to listen to any music files saved directly to your mobile device.