What can happen if you share an illegal file? 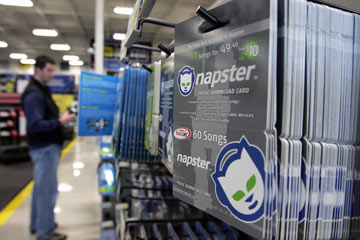 In the days before the Internet, file sharing was pretty straightforward. Of course, it wasn't actually called file sharing back then. We called it borrowing a book, or renting a video, or -- if you wanted to get really high-tech -- recording a song onto a cassette tape. And if you forgot to return the borrowed book or take the video back to the store, the worst you would have had to deal with was an annoyed friend or a small late fee.

In the decade and a half since file sharing has gone digital, all that has changed. File sharing sites like Napster, Kazaa and Megaupload quickly caught the attention of the RIAA and MPAA, who blame illegal file sharing for hundreds of millions of dollars in lost revenue within the music and movie industries. Record companies and movie studios initially went after the file sharing sites themselves, and in many cases, they succeeded in either shutting down the Web sites altogether or forcing them to change their business practices [source: Electronic Frontier Foundation].

But in 2003, the record labels and film studios began to take a different approach: going after the people who download the files. From 2003 to 2008, the RIAA filed, settled or threatened legal action against least 30,000 individuals [source: Electronic Frontier Foundation]. As of May 2012, only two of those cases had actually gone to trial, but the damages awarded in those two cases may be enough to scare off any would-be file sharers [source: Sisario].

Under U.S. copyright law, anyone found to have "willfully infringed" a copyrighted work by illegally reproducing or distributing it may be held liable for as much as $150,000 for each work infringed [source: U.S. Copyright Office]. The juries in both Sony BMG v. Tenenbaum and RIAA v. Thomas-Rassett took that number to heart. Grad student Joel Tenenbaum was found liable for $675,000 in damages for downloading and sharing 30 songs, while single mother Jammie Thomas-Rassett was ordered to pay $1.5 million in damages for 24 songs she made available for sharing on Kazaa [sources: Pinto; Sisario]. Both cases are currently under appeal, but thousands of others have been settled out of court, with accused file sharers paying up to avoid legal fees or drawn-out court battles.

To find out more about legal and illegal file sharing, check out the links on the next page.