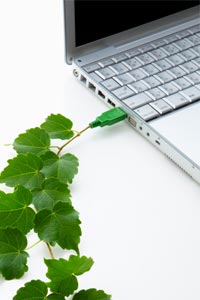 Dell raised a kerfuffle with the Better Business Bureau's advertising division over a claim in a 2008 Apple commercial touting "the world's greenest family of notebooks." Dell charged that the phrasing intentionally misled consumers into thinking that Apple's entire catalog of computers was environmentally friendly, rather than just its special line of eco-conscious models [source: Ensha]. Although the argument may seem like a useless quarrel over semantics, it's an interesting illustration of the murky realm of green electronics.

As with many retail companies these days, some computer manufacturers are burning the midnight oil to add a green sheen to their products. Much of the stuff inside PCs and laptops that make it possible to read this article, for instance, isn't exactly gentle on the environment -- or the human body, for that matter.

In 2006, Greenpeace published the results of an X-ray examination of the materials found inside five leading brands of laptops (Acer, Apple, Dell, Hewlett Packard and Sony), revealing a laundry list of heavy metals and chemical compounds either known or suspected to pollute the environment and potentially cause health problems in humans. For example, the internal wiring of three out of the five laptops contained polyvinyl chloride, better known as PVC [source: Greenpeace Research Laboratories]. A known carcinogen, PVC exposure can lead to nerve damage, immune reactions and liver cancer [source: Agency for Toxic Substances & Disease Registry].

The presence of brominated flame retardants (BFRs), found in the cooling mechanisms of all of the tested laptops, was cause for more alarm. Bromine-based chemical compounds may be carcinogenic to humans and have triggered thyroid problems, neurobehavioral disorders, liver tumors and immune system problems in test rats and mice [source: Agency for Toxic Substances & Disease Registry]. These compounds can leach out of computers, into the air and into humans' bodies. Moreover, a swipe test study of 16 office computers in eight different states found traces of BFR dust on each one [source: McPherson, Thorpe and Blake]. Although the amounts of BFR are small, environmental groups are more concerned about potential bioaccumulation, in which it gradually builds up in the body after long-term exposure.

The European Union now prohibits the use of mercury, cadmium, certain BFRs and other elements from electronics manufacturing. But if people don't live in Europe and aren't in the market for new nontoxic computers, should they fret about endangering their health whenever they press that power button? 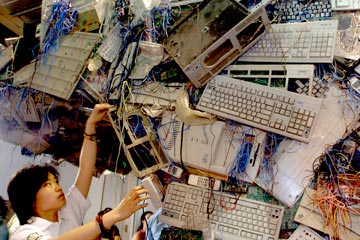