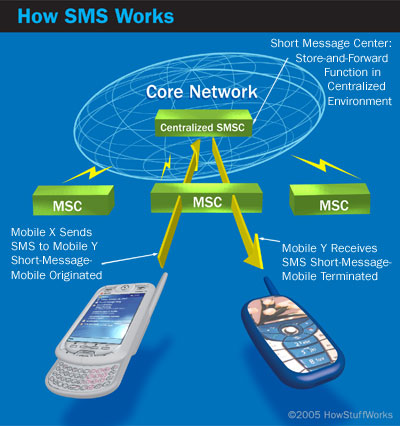 SMS is a common method of sending short messages between cell phones. Find out how SMS works and learn about the advantages of text messaging.

SMS has several advantages. It is more discreet than a phone conversation, making it the ideal form for communicating when you don't want to be overheard. It is often less time-consuming to send a text message than to make a phone call or send an e-mail. SMS doesn't require you to be at your computer like e-mail and instant messaging (IM) do -- although some phones are equipped for mobile e-mail and IM services. SMS is also a convenient way for deaf and hearing-impaired people to communicate.

In addition to person-to-person messages, SMS can be used to send a message to a large number of people at a time, either from a list of contacts or to all the users within a particular area. This service is called broadcasting and is used by companies to contact groups of employees or by online services to distribute news and other information to subscribers.

In a 2004 University of Plymouth study on the psychology of SMS users, researchers found that mobile phone users were primarily either "texters" or "talkers." Compared to the talkers, the texters sent nearly double the number of SMS messages and made less than half as many voice calls per month. The texters preferred SMS to voice calls for its convenience as well as for the ability to review a message before sending it.

Companies have come up with many uses for the service beyond just your typical person-to-person message. Because SMS doesn't overload the network as much as phone calls, it is frequently used by TV shows to let viewers vote on a poll topic or for a contestant. As a promotional tool, wireless carriers put up giant screens­ at concerts and other large-scale events to display text messages from people in the audience.

You can use text messaging subscription services to get medication reminders sent to your phone, along with weather alerts, news headlines or even novels broken into 160-character "chapters." Internet search engines such as Yahoo! and Google have short messaging services that enable users to get information such as driving directions, movie showtimes or local business listings just by texting a query to the search engine's phone number. Social networking services such as Dodgeball use SMS to alert people who live in big cities when their friends or crushes are nearby. The possibilities for integrating SMS into your lifestyle seem endless.

Next, we'll discuss the disadvantages of SMS and look at some alternative communication technologies.

SMS was created during the late 1980s to work with a digital technology called GSM (global system for mobile communications), which is the basis for most modern cell phones. The Norwegian engineers who invented it wanted a very simple messaging system that worked when users' mobile phones were turned off or out of signal range. Most sources agree that the first SMS message was sent in the UK in 1992.

As SMS was born in Europe, it's not surprising that it took a little longer to make its way to the United States. Even today, texting enjoys much greater popularity in Europe, though its stateside use is on the rise. A July 2005 study found that 37 percent of U.S. mobile phone owners had sent or received at least one text message in the previous month [ref].